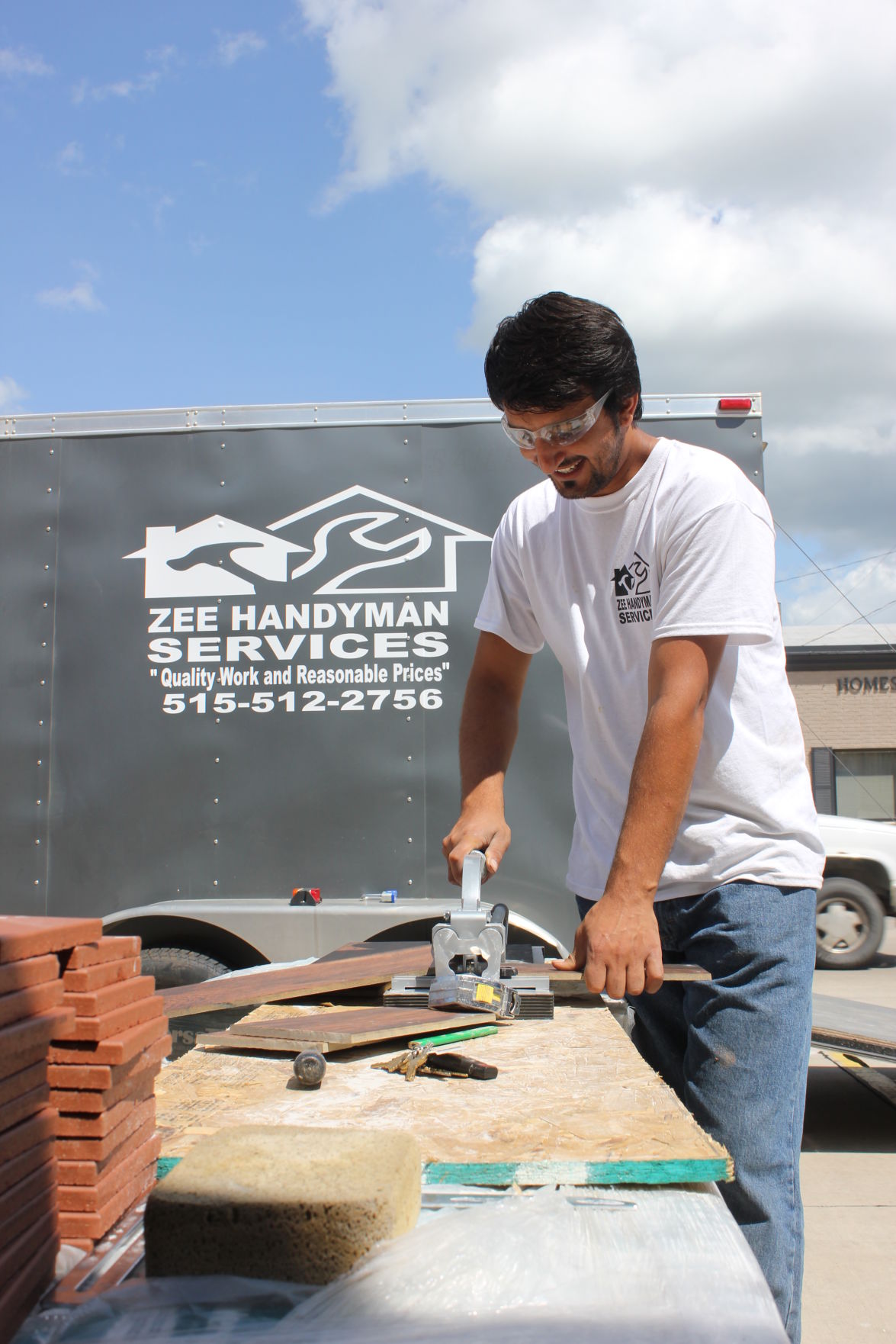 Zalmay Niazy is a small business owner in his adopted home of Iowa Falls. He operates Zee Handyman Services and has several employees who help him with renovation and construction work at homes and businesses. 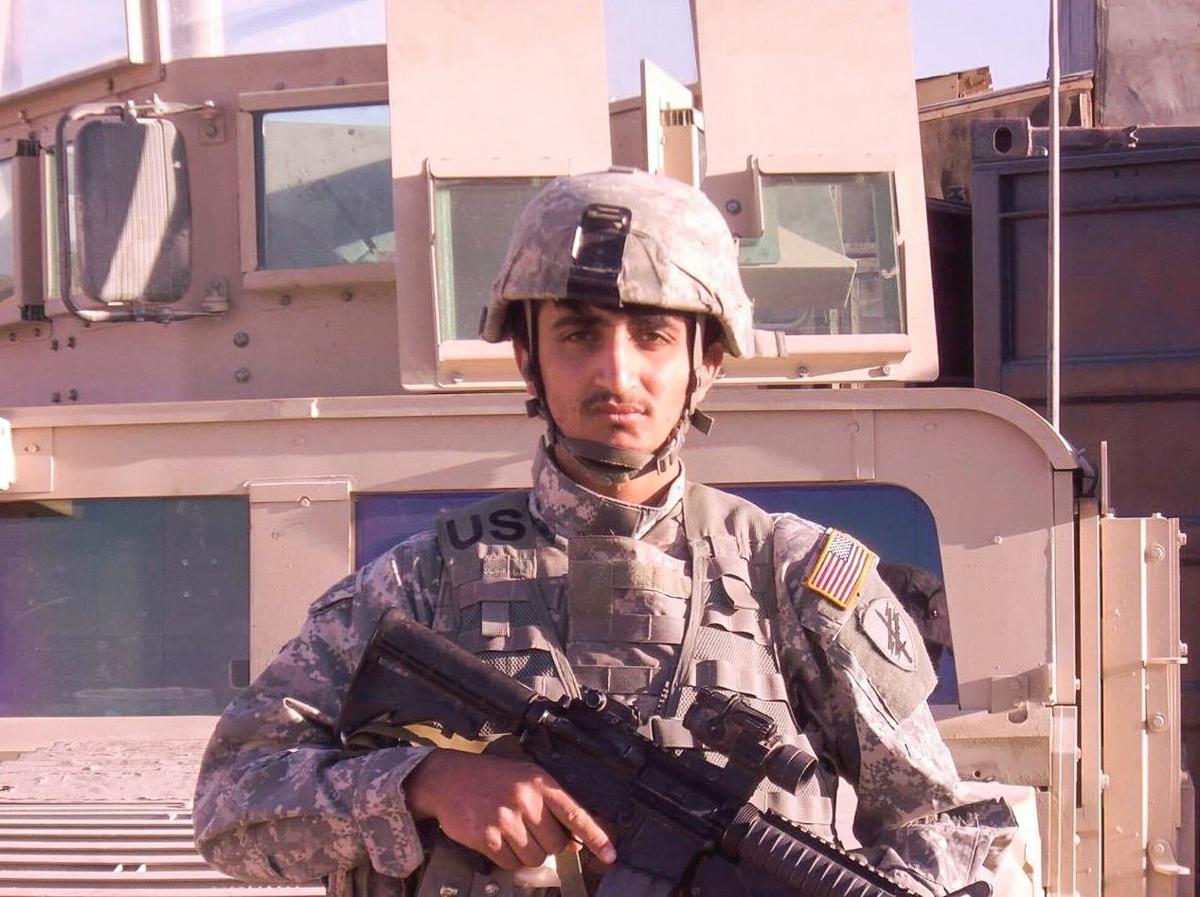 Zalmay Niazy was 19 when he became an interpreter for the U.S. military in Afghanistan. He was wounded several times while doing his work. 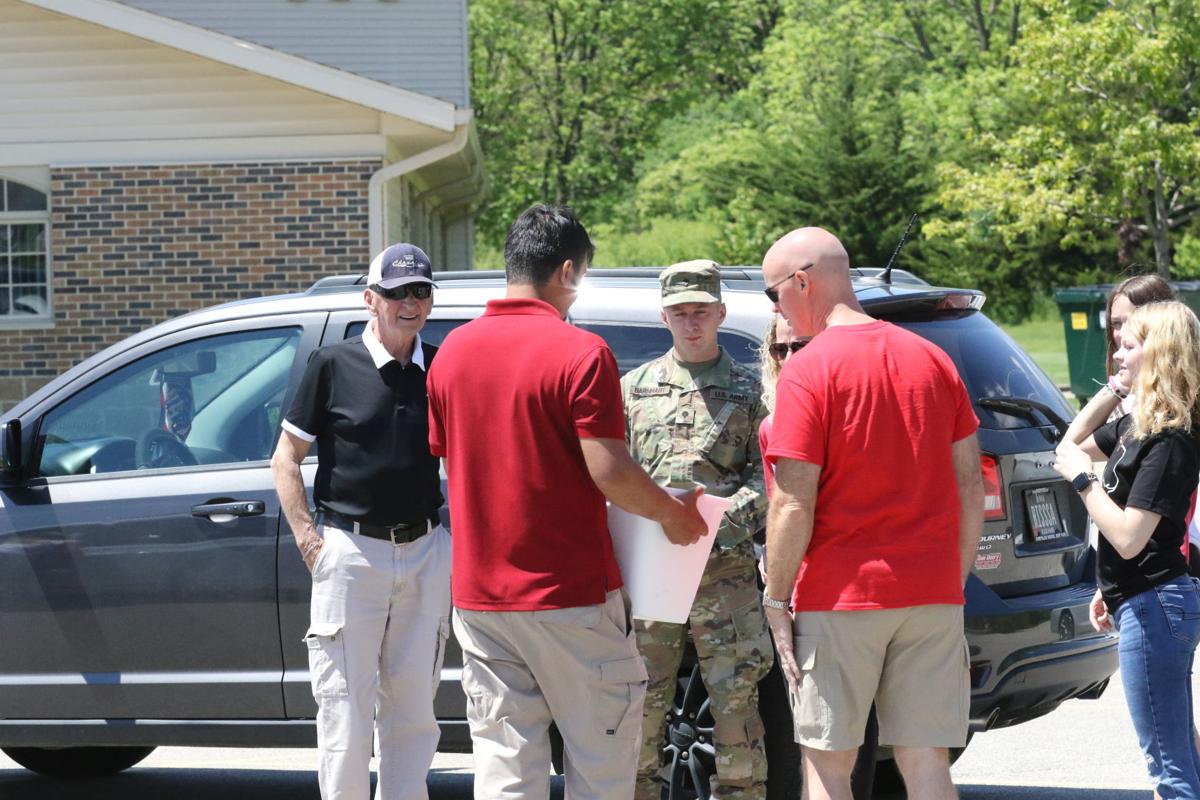 Zalmay Niazy (in red, holding a cooler), a former interpreter for the U.S. military in Afghanistan, handed out drinks and food to families as they arrived to drop off their soldiers for deployment from the Iowa National Guard Armory on Saturday, May 30, 2020. 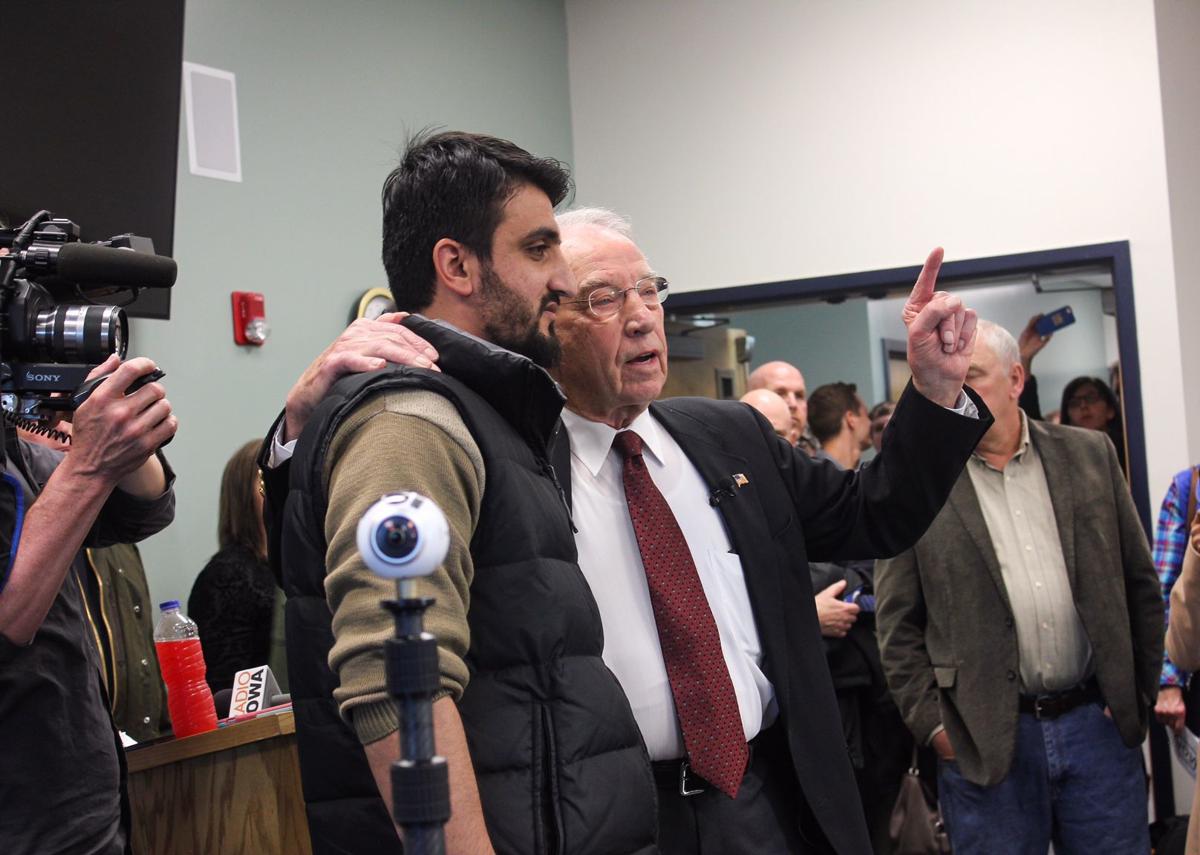 At a February 2017 town hall meeting in Iowa Falls, Sen. Chuck Grassley pledged to do “everything I can do” to help Niazy get asylum. 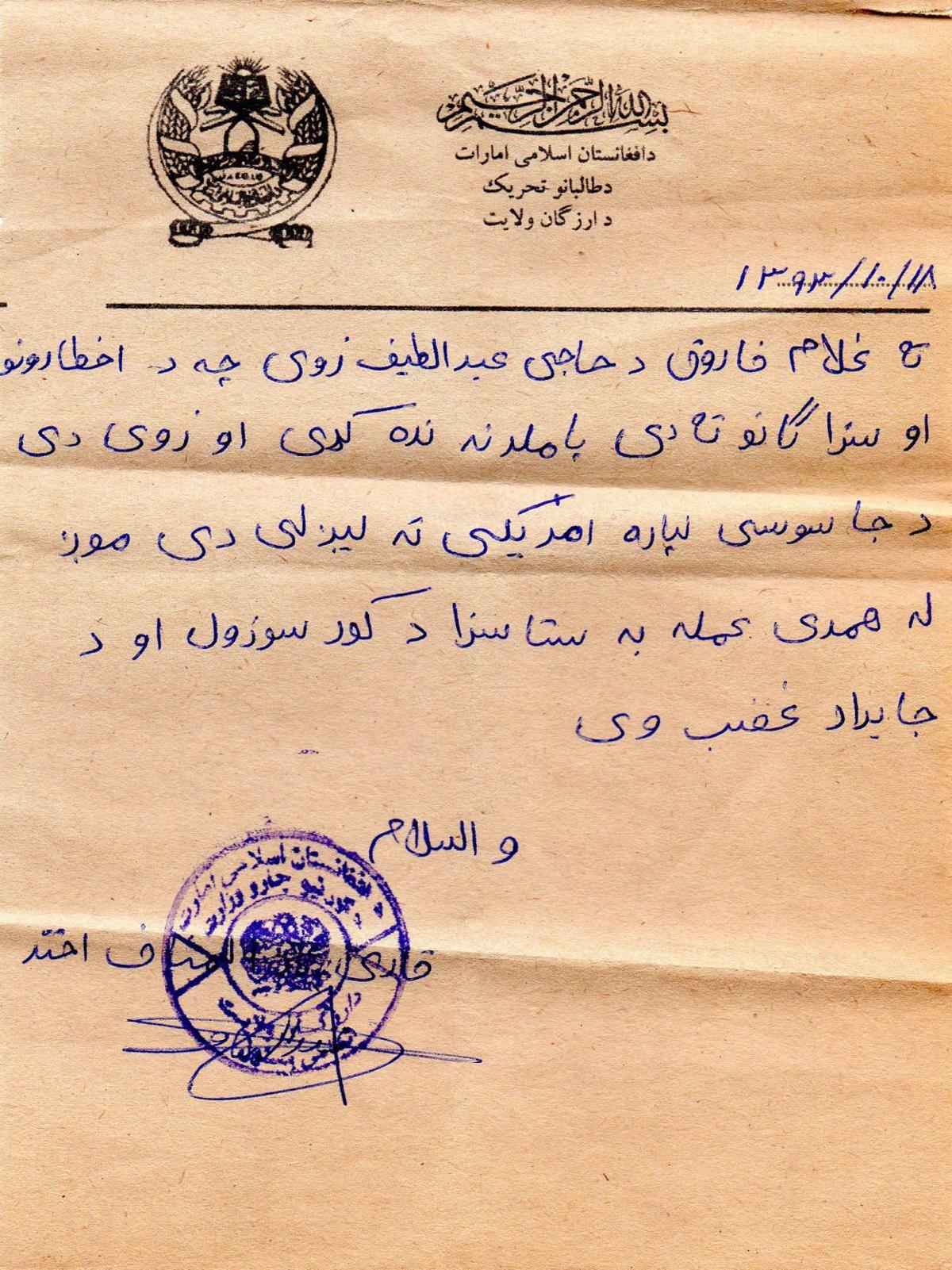 Shortly after Zalmay Niazy began working with American troops in his native Afghanistan, his family started receiving threats via letter from the Taliban. The image above is a scan of one of the letters his family received from Mullah Mohammad Halim Akhundzada, of the Uruzgan Committee of the Taliban.

Zalmay Niazy, the Afghanistan native who became an interpreter for the U.S. military before fleeing his home country for Iowa Falls six years ago, has been denied asylum in the U.S. and may be forced to leave the country.

Niazy said he arrived home for a lunch break on Tuesday to find a letter from the U.S. Department of Homeland Security notifying him that his request for asylum had been denied. The letter included a Notice to Appear, a charging document that the federal government issues to start removal proceedings under the Immigration and Nationality Act.

“I was just blindsided,” said Niazy, who’s known around Iowa Falls as “Z.”

Niazy’s story went public in 2017 after he shared it with a packed room at a town hall meeting hosted by Sen. Chuck Grassley in Iowa Falls. It was broadcast by news organizations that were covering the meeting, and detailed in subsequent stories in the Times Citizen and the Des Moines Register.

His story goes like this: in 2007, at the age of 19, Niazy was hired to be an interpreter for American soldiers who were in Afghanistan as part of Operation Enduring Freedom. During his service, he was wounded in roadside and suicide bombings and he was shot. Because of his work with the Americans, he and his family were threatened by the Taliban, and in 2008 his uncle was murdered by the Taliban.

After his interpreter work ended, Niazy went to work for a private company. He traveled to the U.S. on a business trip  in late 2014. Shortly after his arrival, his family received a letter from the Taliban threatening them, their property and Niazy’s life. Niazy couldn’t go home, so he made his way to Iowa Falls where his cousin, Farid Ahmad – also a former interpreter – had moved after receiving a special immigration visa (SIV).

“They grabbed me by the neck and said, ‘You go home and bring a piece of bread or we will burn your house,’” said Niazy, who did as he was ordered to do.

That interaction is being used to deny his request for asylum.

Niazy’s attorney, Keith Herting of Des Moines, said the basis for the decision goes back to a 2018 ruling by the U.S. Board of Immigration Appeals, which denied asylum for a woman who’d been enslaved by a terrorist organization in her native El Salvador, forced to cook and clean for them. She was ineligible for asylum, the board said, under a law called the material-support statute, which makes it illegal to provide aid to any group that the U.S. government considers a foreign terrorist organization. By giving bread to the Taliban as a 9-year-old, the U.S. government says Niazy does not qualify for asylum.

“I think it’s beyond ludicrous that we’re at the place where we are,” Herting said on Wednesday. “It’s galling that this person who put his own life in danger on multiple occasions, he had family members who died as a result of him working to support U.S. forces in Afghanistan, and I think that the response that the government is giving him is ugly. It’s gross, it’s despicable.

“Our system is so tremendously broken when these stories can be heard by the court and they say we’re going to let these people die or return them to a country where they may die because of something that absolutely meant nothing to anyone,” Herting said.

Niazy has become a familiar face to many people in Iowa Falls. After arriving here in January 2015, he bought a house out of foreclosure, renovated it and now lives there. He launched his own business, Zee’s Handyman Services LLC. And he’s sought out ways to help others, whether it’s handing out water and snacks to Iowa National Guard soldiers before they were deployed last year, or responding to local emergencies on the county’s E-Squad.

Mike Ingebritson was among the first people Niazy met when he moved to Iowa Falls, and the two have formed a father-son bond (Niazy calls Ingebritson "Papa“). The latest news has been hard for Ingebritson, who’s working to find ways to help Niazy through what’s coming.

“It was a gut punch,” Ingebritson said. “We don’t really know where to turn.”

Niazy’s hearing before an immigration judge is scheduled for June 28 in Omaha. Herting said there will be “opportunities to fight this,” but the process is in the courts now. Community members and friends of Niazy who are looking for ways to help are urged to reach out to their elected representatives – U.S. Sens. Grassley and Joni Ernst and Rep. Randy Feenstra – to ask them to step in and help Niazy.

Niazy, who’s still reeling from the news, said he hasn’t told many people about the asylum denial. He doesn’t want to “bother” anyone.

“There is a limit to everything,” he said of his situation. “I can’t even live in my own space and earn a living.”

A committee of Iowa Falls residents is working to organize efforts to support Zalmay Niazy in his quest to stay in the United States.

Donate to the Cause: Help Niazy's legal fund by giving online through GoFundMe here, or give in person at Green Belt Bank & Trust in Iowa Falls (be sure to mark your donation as being for "Team Zee")

Join the Local Effort: A meeting will be held Tuesday, June 8 at 5:30 p.m. at First United Methodist Church in Iowa Falls (619 Main St.). Niazy's supporters will meet to discuss next steps. Everyone is welcome.

What the heck, this man is a excellent person and goes above and beyond to help anyone in need. There has to be a way we can help.

this is so sad ! I hope they find a way to help him stay here. Why are things so messed up ? it just makes me sad...