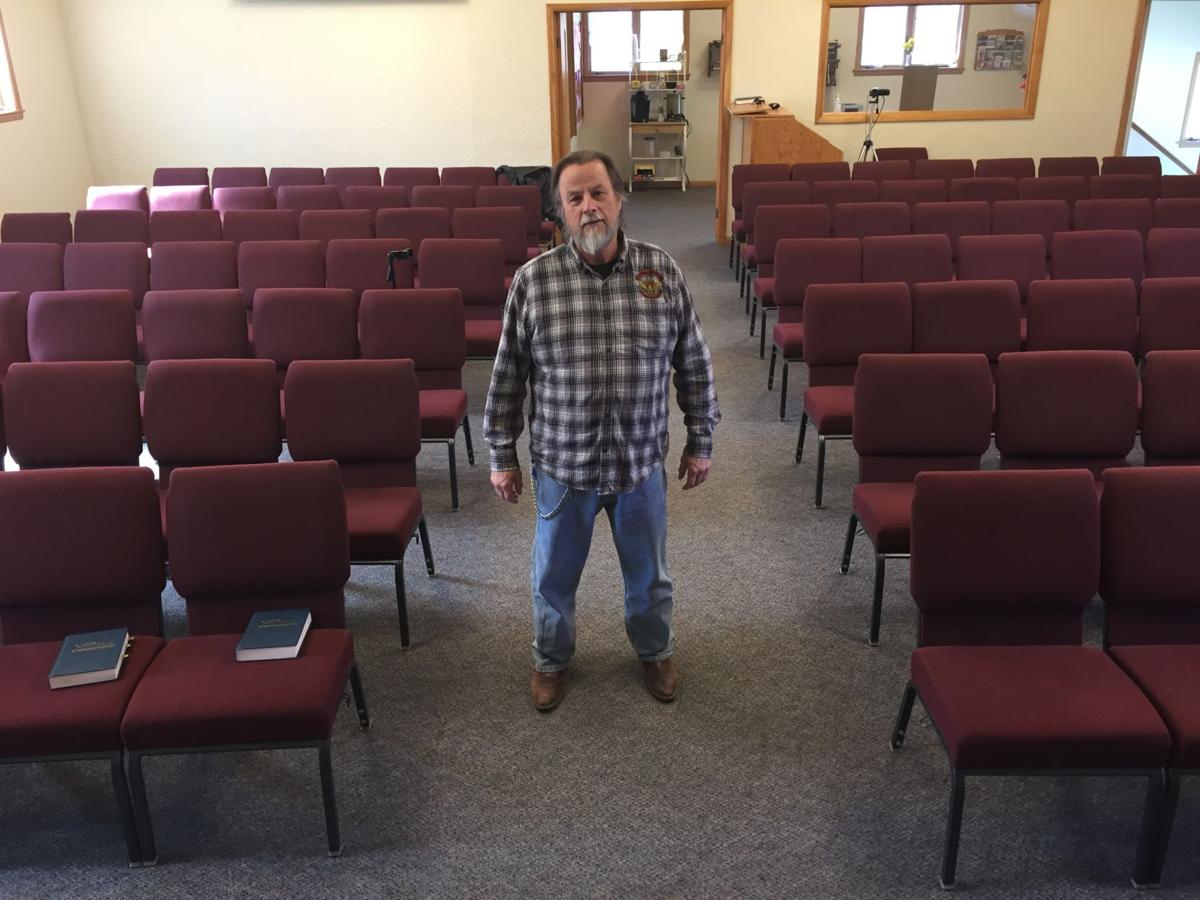 Bethel pastor Steve Hill has been preaching to an empty room since mid-March. Aided by a camera, however, he has still reached his congregation. He and other preachers in Iowa can begin welcoming church goers this week, while other churches will remain closed. 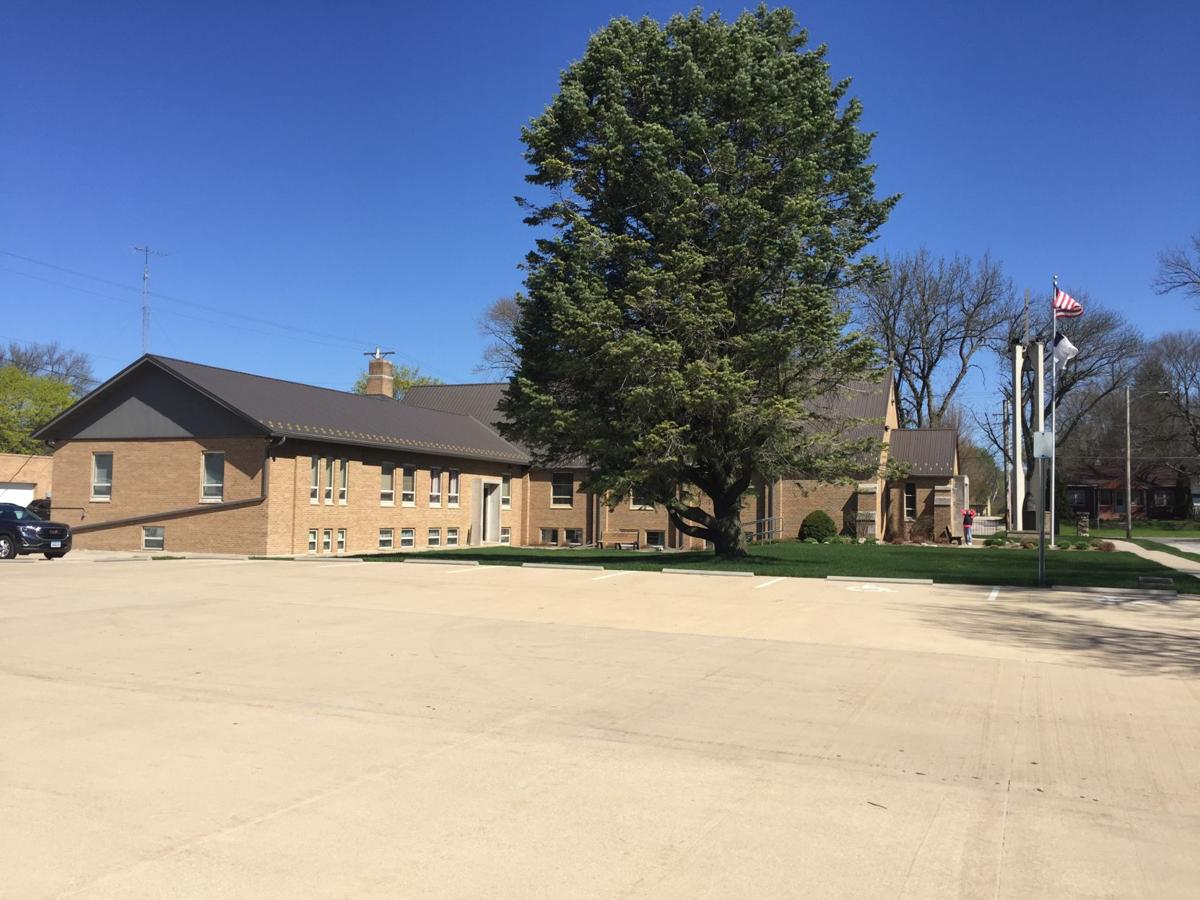 Parishioners at First Christian in Iowa Falls, as well as people in the community, are invited to 'car church' this Sunday. Once there, everybody is asked to remain in their cars and listen to the 9 a.m. service on the radio at 95.3 FM. It's one way, said Pastor TJ Norman, to congregate safely now that some restrictions have been lifted.

Bethel pastor Steve Hill has been preaching to an empty room since mid-March. Aided by a camera, however, he has still reached his congregation. He and other preachers in Iowa can begin welcoming church goers this week, while other churches will remain closed.

Parishioners at First Christian in Iowa Falls, as well as people in the community, are invited to 'car church' this Sunday. Once there, everybody is asked to remain in their cars and listen to the 9 a.m. service on the radio at 95.3 FM. It's one way, said Pastor TJ Norman, to congregate safely now that some restrictions have been lifted.

Monday’s announcement by Iowa Gov. Kim Reynolds that churches will be allowed to open with restrictions this weekend was happy news for pastors and parishioners. But that doesn’t mean that they will be face-to-face any time soon.

While Reynolds' new order makes it possible for churches to re-open, they'll have to do so under restrictions such as providing at least six feet of distance between people.

For the most part, churches in the area are delaying the return of services within their walls for at least another week. That includes the congregations at the Morgan/Bradford and Lee Center United Methodist Churches. All Methodist churches, for that matter, will remain closed in the state until the first Sunday in June. Catholic churches throughout Iowa will also remain closed until further notice.

That’s unfortunate for Morgan/Bradford and Lee Center Pastor Judy Eilders, who is getting ready to retire at the end of June after 52 years behind a pulpit.

Eilders said the decision to remain closed is good for her congregations, which typically rotate Sunday service sites monthly. She guessed the average age of those congregations to be in the 80s. The elderly are especially susceptible to complications from COVID-19. Since closing in mid-March, Eilders has been doing a lot of calling and mailing to keep in touch with her congregation

Eilders said Reynolds’ proclamation put the wheels in motion to begin picturing what services will look like when churches do open.

“We’re still trying to figure out how we can social distance within our congregation,” Eilders said. “And we will have hand sanitizer around the building. We will not pass the offering plate. Instead, they will be in the back. There won’t be fellowship time, at least in the beginning.”

Eilders said extra precautions will likely be followed long after Reynolds lifts all restrictions. It’s the safe thing to do with her aging parishioners.

“We have a number of people who are in the late 80s and into their 90s,” Eilders said. “So we’re trying to be as cautious as we can. We’ll get together and put down some concrete plans on what it will all look like and how we can space people out.”

Iowa Falls Bethel Baptist Pastor Steve Hill will be leading a part of his congregation in live and online services on Sunday. Just how many will sit before him is a question he doesn’t know the answer to. What he does know is that gathering in person has been missed.

“Masks won’t be required, there will be hand sanitizer available, and the offering won’t be passed,” Hill said. “But I have no idea how many people we will have. I know we miss our fellowship together and being around each other. We feel that the Lord calls the body to come together. We are going to be as safe as we can be, and I’ve personally told people at-risk to stay home.”

Live streaming services is something Hill has done for a long time. While that allows his message to go around the globe, he said talking only to a camera is a different experience.

“Sundays have been very, very different,” Hill said. “Streaming is not unusual for me, but it’s unusual to preach to a camera. There’s positives to it, but you still like to be around people."

While many decisions to open or remain closed are left up to governing bodies, Lead Pastor Mike Mentzer of River's Edge in Iowa Falls said it’s not a simple matter of just starting services again. In some ways, it was easier to shut down and start online services. Which, he added, will remain in place for at least an additional two weeks.

“I’m appreciative of what Gov. Reynolds said, but there’s a lot of things that we need to put in place to be able to start getting people back together,” Mentzer said. “So we’re going to take it slow and figure out what our services are going to look like when we get back together.”

Mentzer said it will be an individual decision whether or not to join the congregation as restrictions lighten up. He said he doesn’t know what to expect when the doors open again.

First Christian Church, at the corner of Washington Avenue and Fischer Street in Iowa Falls, will certainly look different this Sunday. With social distancing limiting seating inside to maybe 24 people, Pastor TJ Norman said the first Sunday with relaxed rules will take place in the parking lot.

Parishioners and the community are invited to park in the church lot and side streets as KIFG airs Sunday’s service on 95.3 FM at 9 a.m.

“One of the advantages that we have is our radio broadcast every Sunday morning,” Norman said. “We have been doing that for over 40 years. So what we decided to do is ‘car church’ and have people stay in their cars and listen separately together.”

Norman said it will not be the as ideal as gathering in the sanctuary, but there will still be a chance at the fellowship that has been missed since mid-March.

“Obviously our church members are invited, but anybody in the community who wants to congregate with us in their cars can,” Norman said. “At least we’ll be listening to the same thing at the same time and be able to see each other through our windshields.”

Norman said the plan is to continue with ‘car church’ through at least next week. At that time, another decision will be made based on Gov. Reynolds’ direction.

“We are going to stay very close the CDC regulations and their regulations, and we’re going to pay very close attention to what our governor has to offer,” Norman said. “We’ll kind of play it by ear. I’m not imagining there is some silver bullet that will drastically change our need to social distance in the next month. Something like this may end up what we do moving forward for a while.”

*Our Saviour’s Lutheran Church No services until May 10.

*St. John’s United Church of Christ no in-person services until June 7. Guest speakers will be announced and they will have either live or pre-recorded services on their Facebook page.

*United Church of Christ no services until further notice.

*St. Paul’s Lutheran Church, Alden and Buckeye. Will offer both continued online services and un-church services beginning May 3. Social distancing rules will apply. Services begin at 8 a.m. in Buckeye and 10 a.m. in Alden.

*United Methodist Church in Alden, has canceled all services and activities until June 1.

*First Reformed Chuch no services until May 31.

*St. Paul Lutheran Church has extended suspension of services pending a board meeting on May 6.

*Eldora United Methodist Church remaining closed until at least June 1. Services will be taped and available for view on Vimeo.

*United Methodist Church No services until at least June 1.

*St. Peter’s United Church of Christ No services until May 24 with Memorial Day Cemetery service. First regular service following social distancing is scheduled for May 31 at 9:30 a.m.

*St. John Evangelical Lutheran Church will be offering services to individuals and families in 20 minute blocks. Registration for these blocks are available on a sign-up sheet in the church hallway or virtual sign-up at www.stjohnhubbard.com/covid-19. Sunday service also available on YouTube.

*Zion United Church of Christ no services until further notice.

*First Congregational United Church of Christ will use Zoom for live interactive worship and will continue through May.

*First United Methodist Church does not plan to reopen to public worship before May 31. Services will continue online.

*Immanuel Lutheran Church sermons remain on YouTube channel found under the worship tab on their website www.immanuellutheraniowafalls.org. Church is open beginning this May 3 under restrictions. Regular Saturday and Sunday services begin May 9-10.

*United Church of Christ no services until further notice.

*St. Paul’s Lutheran Church services are still canceled. Sermons may be seen through the church website.

*Our Savior’s Lutheran Church Scripture lessons and sermons may be emailed or found on the church website and on Facebook.

*Baptist Church has decided to not have service at church for at least the next two weeks. Online services available through the church website.