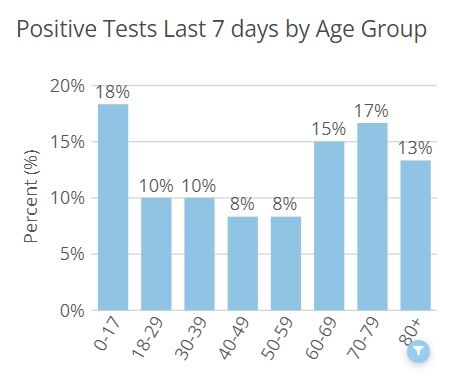 A graph on the Iowa Department of Public Health's coronavirus website shows the breakdown of ages of new COVID-19 cases in Hardin County between Oct. 6-12. The greatest share - 18 percent - were in children age 0-17. The graph also shows an increase in cases among older adults and the elderly.

A chart on the Iowa Department of Public Health's coronavirus website shows Hardin County's COVID-19 cases from March 2020 through this week. Last fall's surge in cases can be seen near the center, and the recent second surge can be seen on the far right.

The number of Hardin County residents who tested positive for COVID-19 over the last week remained steady from the previous week, indicating that while the recent surge in cases has eased, spread of the novel coronavirus remains high and the public should take measures to protect themselves.

The Iowa Department of Public Health reported on Wednesday that 61 Hardin County residents tested positive for COVID-19 between Oct. 6 and 12. The previous week the state reported 65 new cases. As of this week, a total of 2,664 Hardin County residents have tested positive for the disease since March 2020. Of those, 2,270 have recovered and 48 local residents have died, leaving 346 active cases of the disease as of Tuesday, down from 425 the week before.

Despite the decrease in active cases, Hardin County remains an area of high transmission according to guidelines established by the Centers for Disease Control and Prevention. Counties that record 100 or more new cases of COVID-19 per 100,000 population in a seven-day period are considered an area of high transmission and the public is advised to wear face masks inside public places, regardless of vaccination status. Hardin County’s 61 new cases equates to 362 cases per 100,000 population.

Young people were among the most affected by coronavirus over the last week, but the disease is showing up more in older populations. The state reported that of the 61 new cases, the greatest share – 18 percent – are age 0-17. Fifteen percent are 60-69; 17 percent are 70-79; and 13 percent are 80 and older.

The surge of cases across the state, which began in Hardin County in early August, has infected long term care facilities, many of which were hard hit by the virus last year before vaccines were available. In July, the state stopped reporting which facilities were in outbreak status – defined as three or more positive COVID-19 tests among residents. Now, the Iowa Department of Public Health lists only the number of facilities that are currently in outbreak status. As of this week, 29 long term care facilities are experiencing outbreaks, and according to the Iowa Capital Dispatch, an online news outlet that obtained documents from the state health agency, Scenic Manor in Iowa Falls was one of the facilities with an outbreak. The Capital Dispatch reported last Friday that Scenic Manor’s outbreak began on Sept. 7, and it had recorded seven positive cases as of last week.

While hospitalizations declined over the last week – from 626 statewide on Oct. 5, to 598 this week – the number of people in Iowa’s ICUs has increased. According to the state, last week 141 people were in Iowa’s ICUs for treatment of COVID-19, and this week there are 150 in ICUs. There are also more COVID-19 patients on ventilators – from 66 last week to 78 this week.

According to numbers released Friday by Hardin County Public Health, the Alden ZIP code saw the highest rate of COVID-19 transmission between Oct. 1 and 8. The local public health agency releases COVID-19 data – including ZIP code infection numbers – weekly on Fridays. Last week’s report showed the Alden ZIP code added 12 new cases in a week, which is 727 per 100,000 population. The second-highest transmission rate in the county was found in the Iowa Falls ZIP code, which recorded 27 new cases, or 400 per 100,000, and the Radcliffe ZIP code finished third with four cases, which is 381 per 100,000. New cases per Hardin County ZIP code Oct. 1-8 were as follows: