While the number of new COVID-19 cases identified in Hardin County over the last week was down from the previous week, a report from the White House Coronavirus Task Force warns that hospitalizations will continue and it may take four to five weeks to see the results of strong mitigation efforts - but only if everyone complies with guidelines intended to slow spread of the disease. 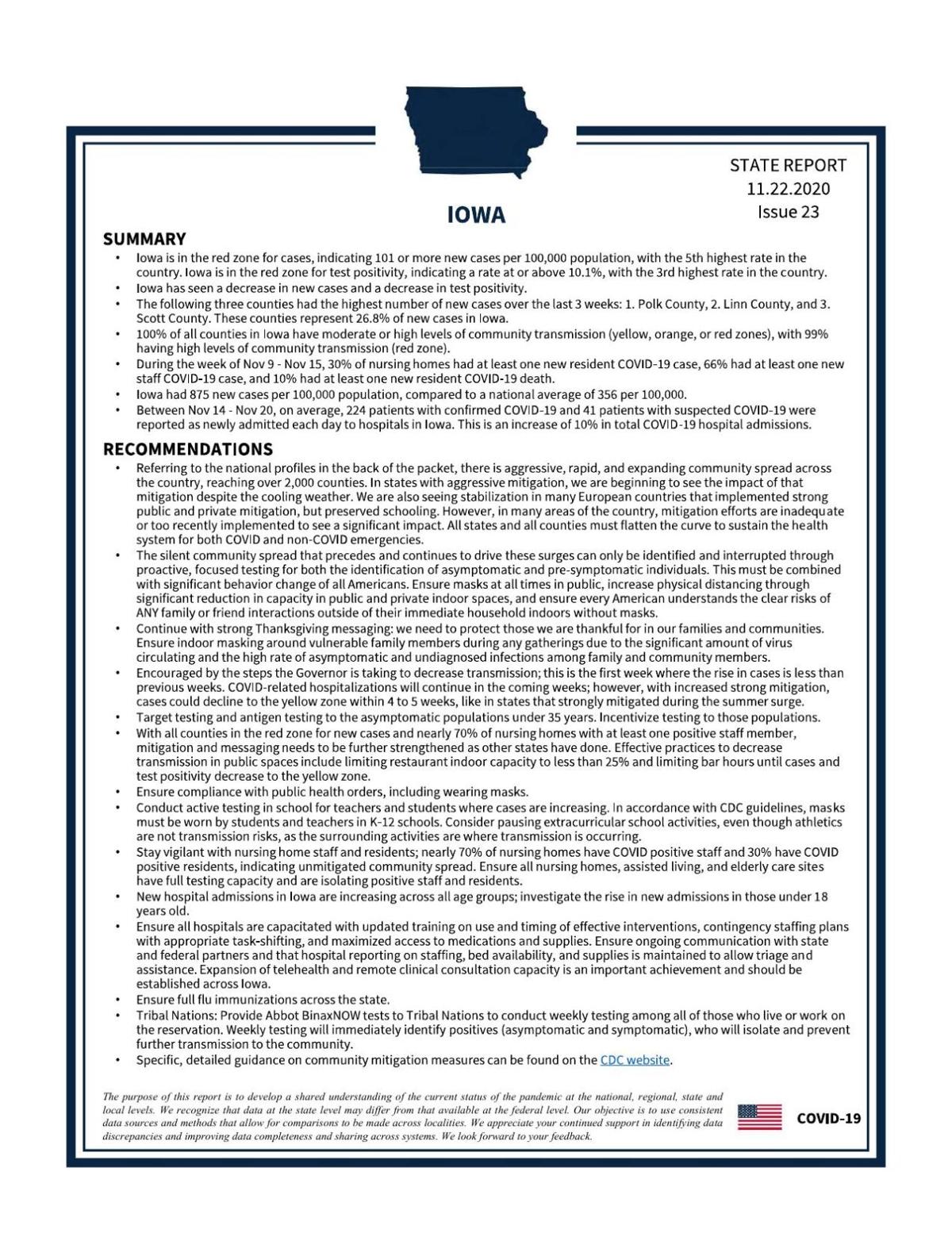 The report described the task force as being "encouraged" by Gov. Kim Reynolds' announcement of a partial mask mandate on Nov. 16. But the report recommended more strict mitigation measures.

"The silent community spread that precedes and continues to drive these surges can only be identified and interrupted through proactive, focused testing for both the identification of asymptomatic and pre-symptomatic individuals," the report reads. "This must be combined with significant behavior change of all Americans. Ensure masks at all times in public, increase physical distancing through significant reduction in capacity in public and private indoor spaces, and ensure every American understands the clear risks of ANY family or friend interactions outside of their immediate household indoors without masks."

The report recommends "active testing" in schools for teachers and students. It also asks the state to consider pausing extracurricular school activities, "even though athletics are not transmission risks, as the surrounding activities are where transmission is occurring."

It is unclear what effect the Thanksgiving holiday may have on local, state and national infection numbers. Earlier this week, Reynolds urged Iowans to stay home on Thursday and avoid gatherings with people outside their households, but media across the country have reported busy airports.

As of Friday morning, Hardin County has seen a total of 1,131 cases of COVID-19 since testing began in March. Of those cases, 532 people are classified as recovered and 10 have died, leaving 589 people currently infected with the disease.

Hospitalizations statewide are still high, but declining. As of Friday morning, 1,226 Iowans were hospitalized. That number is the lowest its been since Nov. 11, and down from a high of 1,527 on Nov. 17. As of Monday this week, 10 Hardin County residents were hospitalized for COVID-19.