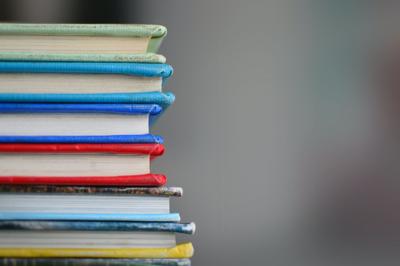 The Iowa Falls and Alden school districts will start the new school year with half the students attending two days a week and the other half attending the other two days. But beyond that, many of the details of the new school year – held amid a global pandemic that’s spreading throughout the country, in Iowa and within Hardin County – have yet to be announced. 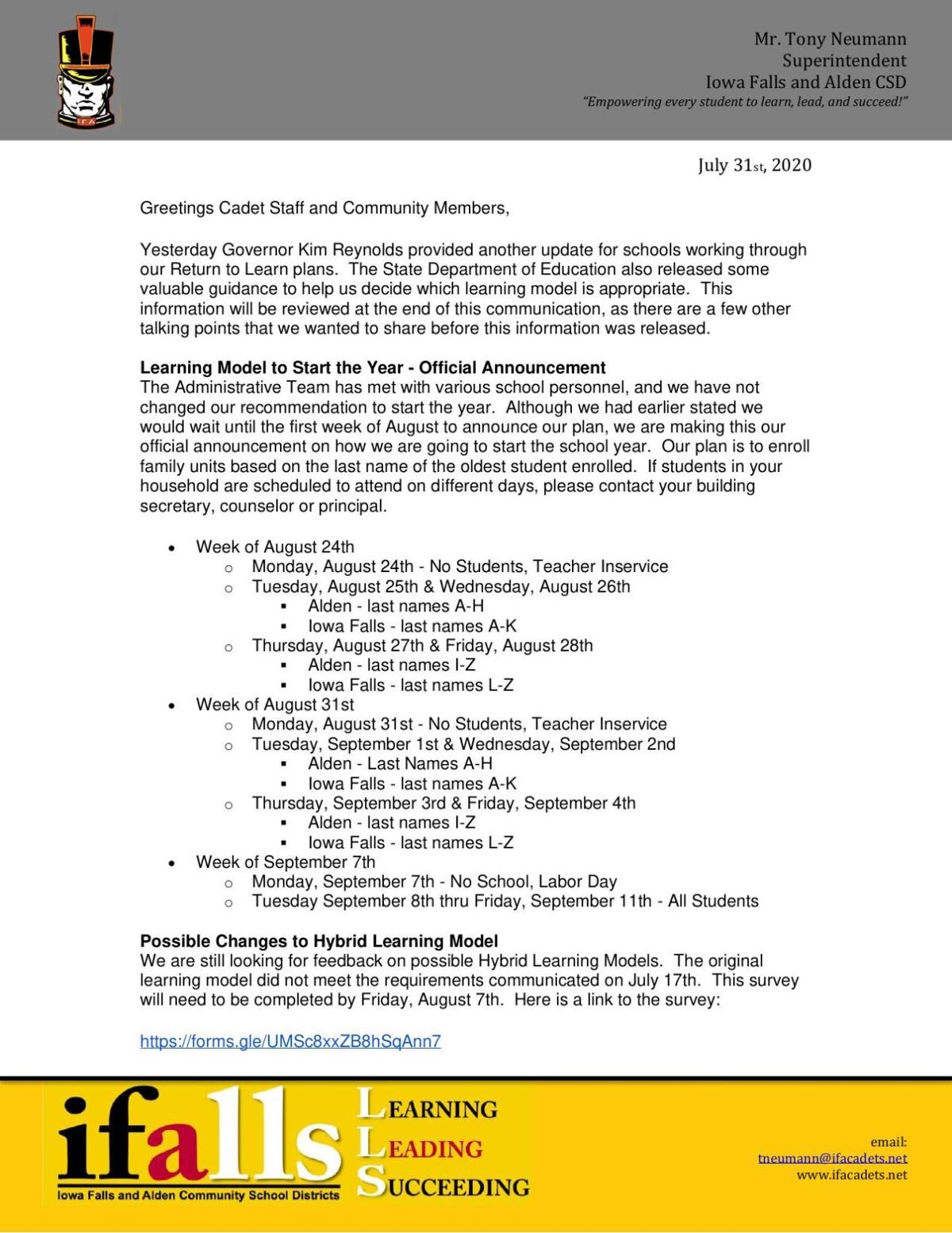 Superintendent Tony Neumann announced the start-of-the-year learning model on Friday afternoon, releasing it on social media and in an email to families. Originally, the districts said they would wait until the first week of August, but Neumann said the plan was finalized and administrators wanted to give families as much time as possible to plan for the start of the new year.

“We thought it was more important for parents to know what day their kid is coming to school,” he said. “We just want to give parents as much notice as possible.”

Under the plan, for the first two weeks of the school year, Mondays will be set aside for teacher inservice, and students will attend two days a week – Tuesday/Wednesday or Thursday/Friday, depending on the first letter of their last names. Siblings will follow the same schedules to help families plan for child care and transportation. Beginning the week of Sept. 7 (after Labor Day) all students will attend school.

Neumann said administrators are anticipating it’s going to be a “hard transition” for everyone, so they want to set aside time in the first two weeks to adjust to the changes.

“There’s so many more things to teach that we thought it would be best to do that with half the audience,” he said, referencing changes to how students will walk down hallways, eat lunch, attend recess and other procedures. “After a five-month layoff you’re not going to come to school for five days right away. We wanted to ease up on how we come back.” 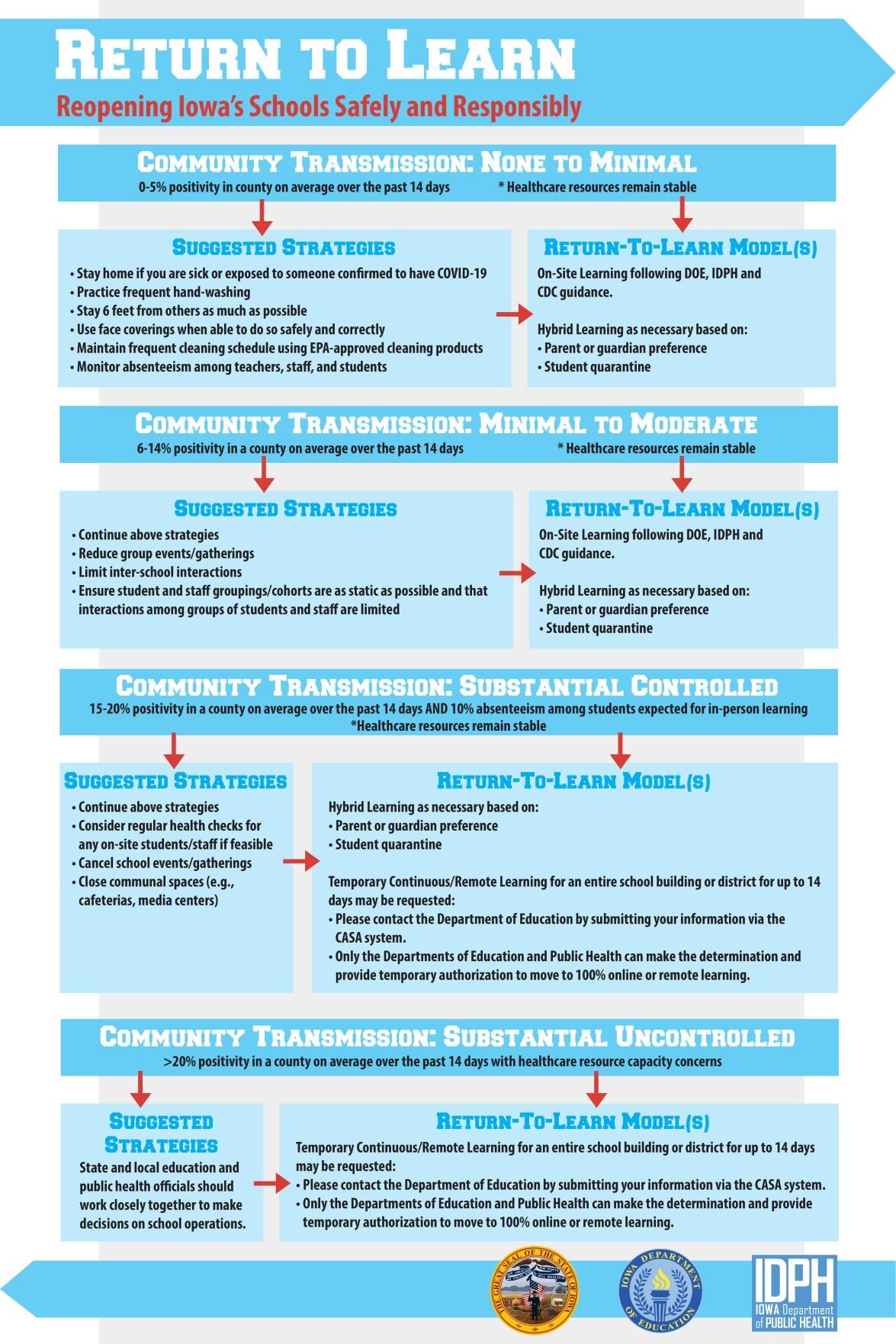 On Thursday last week, Gov. Kim Reynolds announced the benchmarks that will determine whether school districts can shift from in-person education to a hybrid or remote learning. They’re based on each county’s 14-day positivity rate – the percent of a county’s residents who tested positive for COVID-19 compared to the total number of county residents tested. The guidelines, based on 14-day positivity rates, are as follows:

There is no hard cutoff right now, but in general, we like to see positivity rates less than 10% in a community. There are also a number of other factors to consider - including trends, amount of testing, and local response capacity.

Those benchmarks exceed recommendations from by U.S. Surgeon General Jerome Adams during a “Face the Nation” interview and in a tweet on July 24. In response to a question about when schools should close down due to COVID-19 spread in the community, Adams tweeted, “There is no hard cutoff right now, but in general, we like to see positivity rates less than 10% in a community.” The governor’s guidelines require at least 15 percent positivity to close schools.

Last Thursday, when Reynolds announced the state guidelines, she said 93 of Iowa’s 99 counties had positivity rates below 15 percent. She didn’t name the six counties with higher rates, but according to state testing and positive cases data, Hardin County was one of six with a positivity rates above 15 percent.

The state does not currently make each county’s 14-day positivity rate available to the public or to school districts, and Hardin County Public Health Coordinator Rocky Reents said she also does not have access to that data. Neumann – a former math teacher – has built a spreadsheet to track the 14-day rate for Hardin County.

“Lacking any metrics from the state, that’s what we’re going to use,” he said.

Parents can choose to keep their children home for remote learning. In the Iowa Falls and Alden school districts, they’ll have two options for remote education: a third-party curriculum program (Edmentum or Edgenuity), or a lesson plan developed by the local district that follows in-class instruction.

Neumann said the distance learning models can also be used if a student has to quarantine for two weeks because of a COVID-19 exposure or a positive test.

Friday’s announcement about the first two weeks of school did not contain many of the details about the in-person school days that some parents and students have been waiting to hear. While decisions about how and where students will eat lunch, and how they’ll move from one area of the building to another are being finalized, the decision about whether face coverings will be required is going to be made by the school boards.

“School boards don’t have to determine the model we’re in for the first two weeks, and they’re OK with that,” he said. “But if we’re going to have a face covering policy I want the boards to act on it.”

The district is still gathering input from families before finalizing a hybrid learning model that could be implemented if COVID-19 positivity rates warrant it. Neumann said the survey should be completed by Aug. 17. Find a link to it here.

Find more information about the first two weeks of school here, and keep up with Iowa Falls and Alden school announcements on the districts’ shared Facebook page.