You are the owner of this article.
Edit Article Add New Article
You have permission to edit this article.
Edit
Personalities
Coverage Area
Gallery
Cook's Corner
TC Careers
Can You Relate?
Times Citizen
Ackley World Journal
KIFG
1 of 8 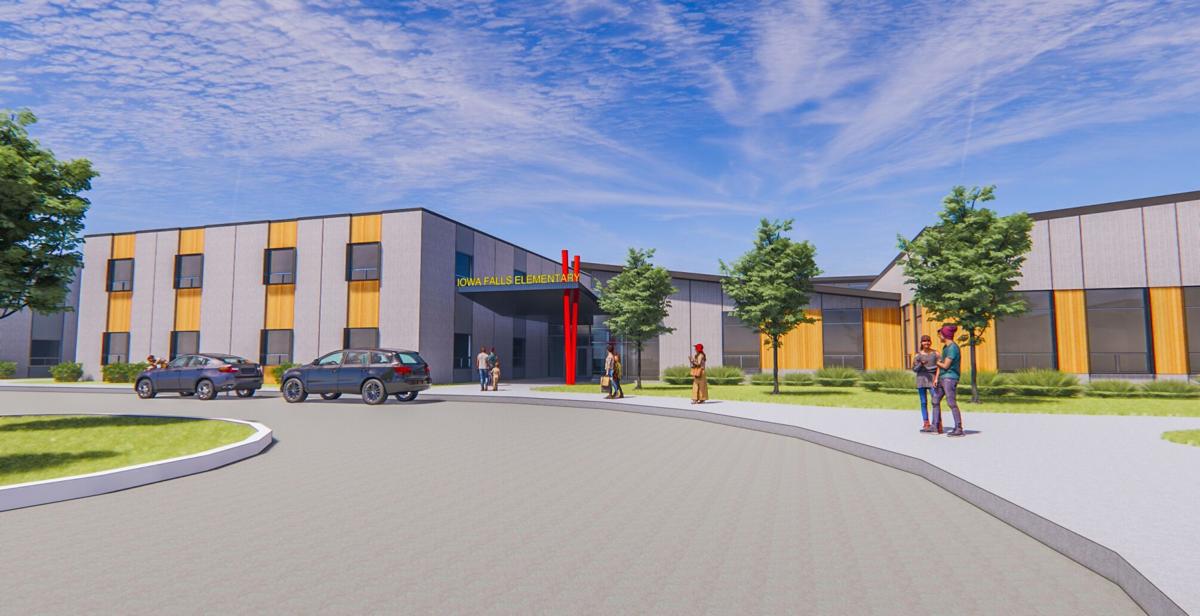 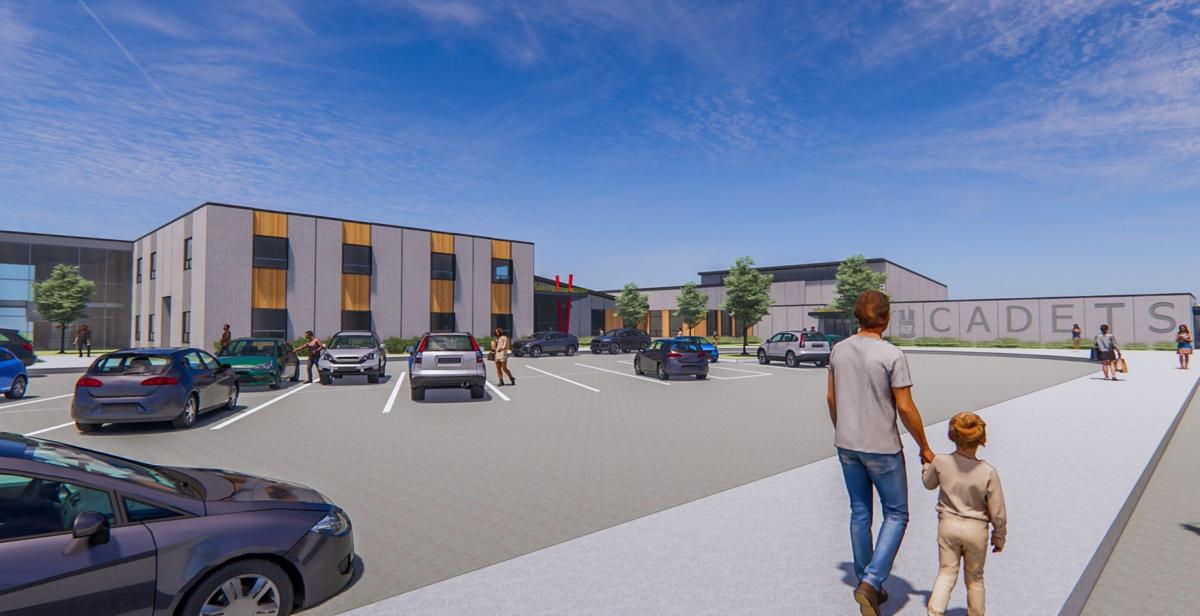 A preliminary architectural rendering of a proposed Iowa Falls elementary school shows how the building would look from ground level, standing between two parking lots. The existing Iowa Falls-Alden High School is not pictured, but it is to the right of the image above. The building on the left is the proposed new elementary school. 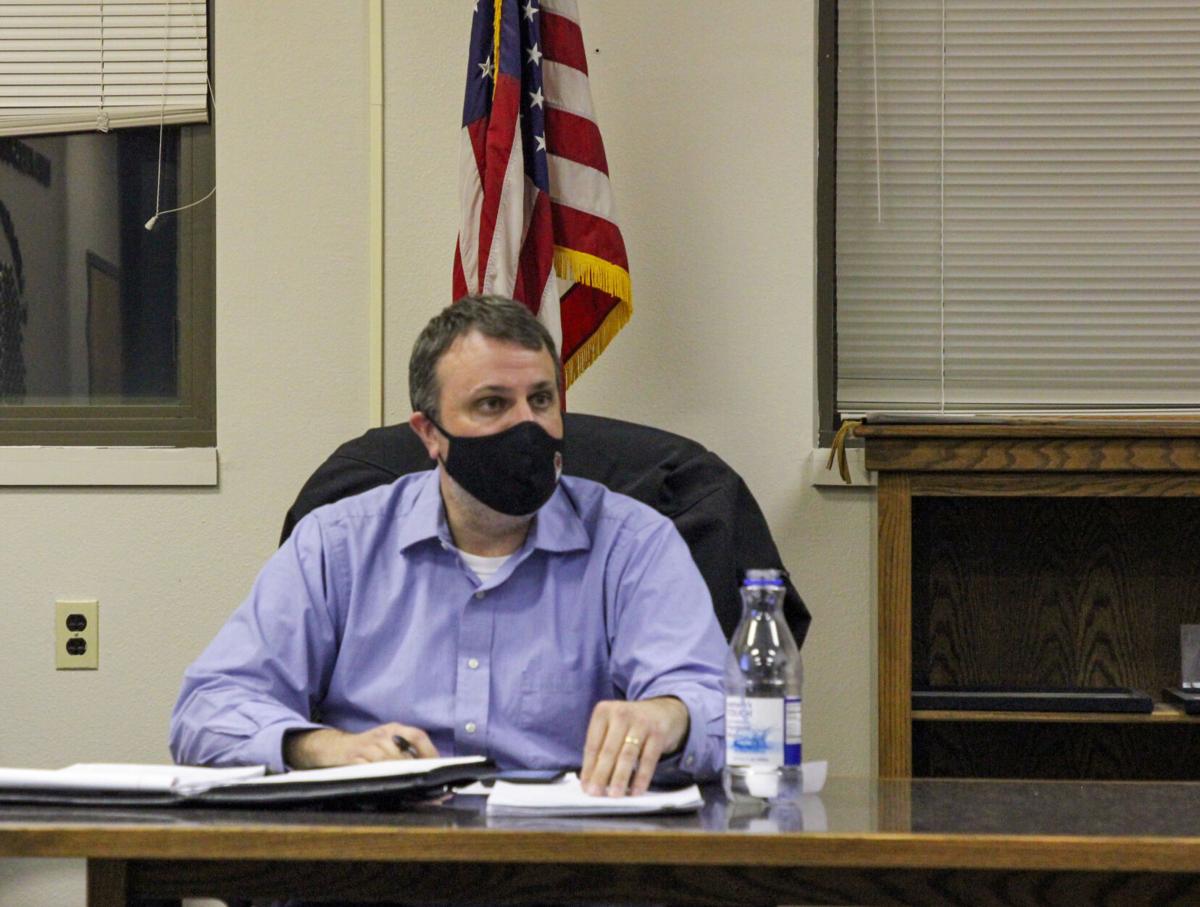 Iowa Falls School Board Vice President Chris Stauffer speaks during discussion on Jan. 11, 2021 about a petition to put a special bond issue on the March 2 ballot. 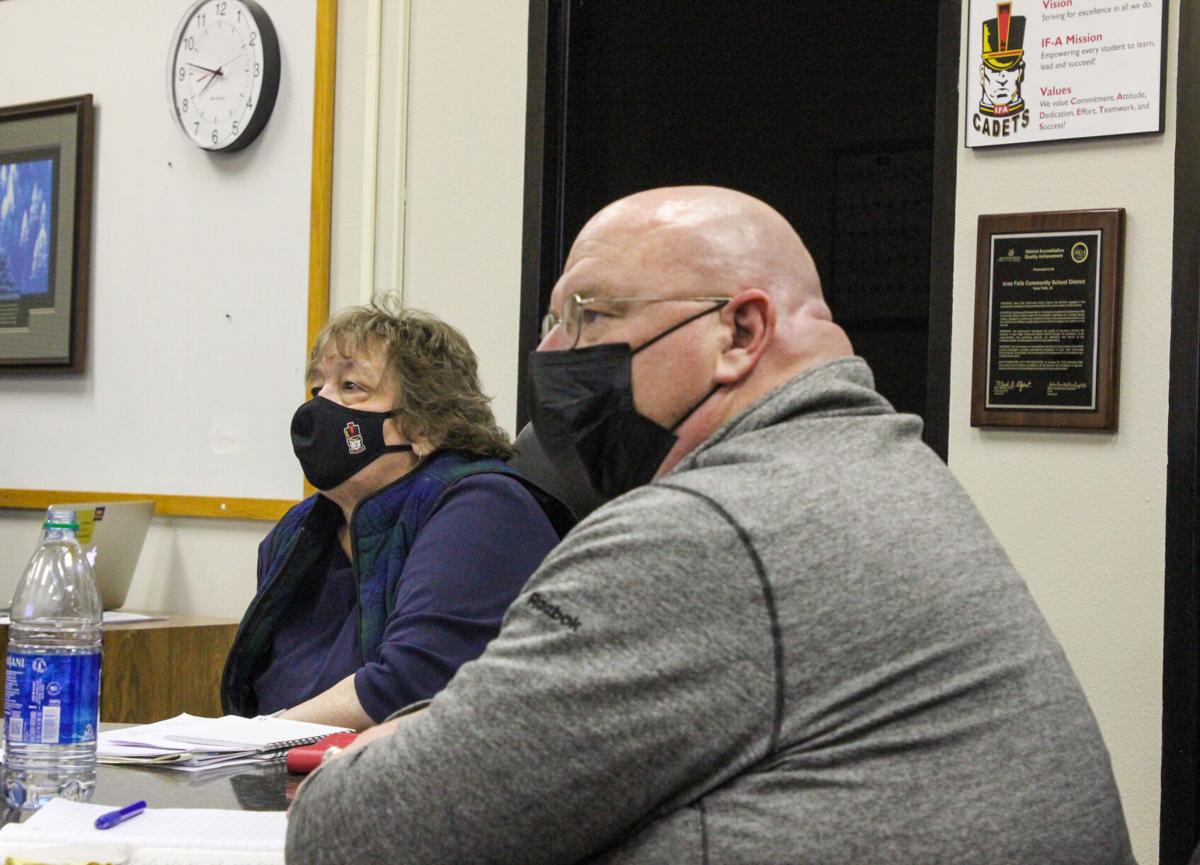 Iowa Falls School Board members Dawn Parker and Jack Kobe review a resolution during a Jan. 11, 2021 meeting. The resolution, which was ultimately approved by the board, will put a $28.5 million bond issue on the ballot for a March 2 special election. 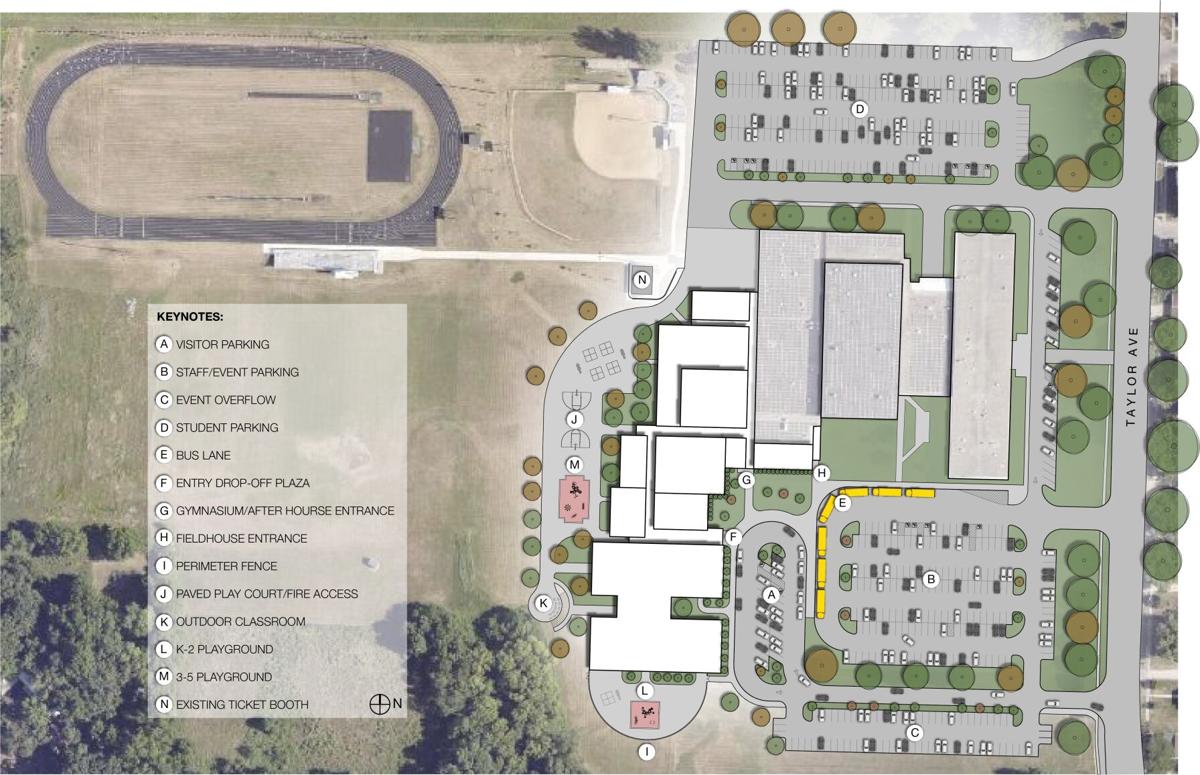 A site plan of the proposed new Iowa Falls elementary school, shows the new building to the southwest of the existing Iowa Falls-Alden High School.

An architectural rendering of a proposed new Iowa Falls elementary school shows how the building would be situated adjacent to the existing Iowa Falls-Alden High School. The image is looking northwest, with the high school in red on the right side of the image.

A preliminary architectural rendering of a proposed Iowa Falls elementary school shows how the building would look from above, looking northwest. The red building in the top right corner is the existing Iowa Falls-Alden High School. The portion of the building on the left side of the image would be classroom space for preschool through fifth grades. 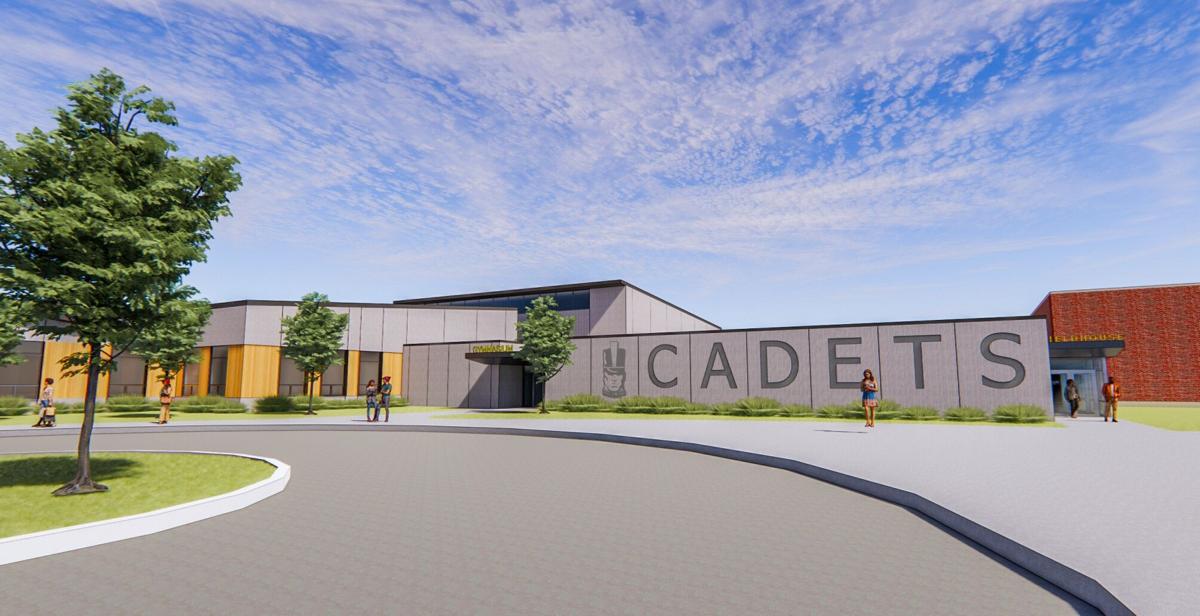 A preliminary architectural rendering of a proposed Iowa Falls elementary school shows how the building would look connected to the current Iowa Falls-Alden High School. The high school can be seen at the right in the above image (the red brick).

A preliminary architectural rendering of a proposed Iowa Falls elementary school shows how the building would look from above, looking northwest. The red building in the top right corner is the existing Iowa Falls-Alden High School. The portion of the building on the left side of the image would be classroom space for preschool through fifth grades.

Soon, the question of whether the Iowa Falls School District should raise taxes to fund construction of a new school will be up to the voters to decide. On Monday, the district’s board voted to accept a petition that will put the issue on the ballot for a special election on March 2.

“Looking through the petition, after growing up here, you see a lot of names you recognize,” board member Chris Stauffer said of the 412 signatures collected by the project’s Vote Yes Committee. “All age groups, business, farm, all areas of the community. This is a very detailed cross-section of our community. It’s not like you have one part of the community saying yes. It’s exciting.”

If the ballot’s two questions both get more than 60 percent of the vote, the district’s property tax levy will increase an estimated $3.82 to collect $28,560,000, and work will begin to plan for construction of a new elementary school adjacent to Iowa Falls-Alden High School. It would replace the district's two current elementary schools, which were built in 1935 and 1938, and which a 2020 facilities study showed are outdated and in need of major upgrades.

The first preliminary architectural renderings of what the new building may look like were reviewed at Monday’s meeting. The proposed building would be home to preschool through fifth grade, and it would include a gymnasium and a library, as well as space for art and music, and a cafeteria that doubles as a storm shelter.

But the project wouldn’t stop with the elementary school. It would also construct new high school band and art rooms and an expanded shop, as well as relocated visitor’s locker rooms.

The drawings presented on Monday give a clearer picture of how and where the elementary school would attach to the high school, and how the new construction would affect current parking and athletic fields. Superintendent Tony Neumann pointed out that the elementary school’s classrooms would be separated from the high school by a gym and cafeteria, with no easy access to move from one building to the other.

“There’s a lot of distance between elementary and high school students,” he said. “It’s one campus, but very much separated.”

Outside the buildings, only the high school shot-put area would need to be moved, a project that was already being planned. The practice football field and other track and softball areas, as well as the property’s concession building and a new ticket booth, would be untouched by the project.

On the topic of parking, the plans show expanded and new parking lots to compensate for the loss of parking because of the building project. The front driveway parking lot at the high school would be expanded from the current eight spots, to 25. The north lot would be expanded to the north, and the south lot would be pushed out on three sides to provide more parking. In total, Neumann said he counted 550 parking spots on renderings of the new campus.

Before voting to put the issue on the ballot, the school board was asked to choose between three optional rough layouts, and between a one-story and a two-story elementary. Ultimately, the board chose to go with a two-story building that will require an additional $400,000 in funding beyond the bond measure. The plan will provide the maximum amount of space and organize the elementary school’s classrooms according to grade level in one two-story block. Board members favored that plan over expanding the footprint of the building to accommodate all of the grade levels.

“I think the bigger part of it is the expansion, the ability to grow,” board member Jack Kobe said about the largest of the options, which provides "extra" rooms. “I’m hoping that by doing this, it’s going to enhance our community, which we all want to have happen. And then we’ll have more people who want to move into the community and our community will continue to grow.”

Others considered the comparatively affordable price of $400,000 to provide three additional classrooms in the two-story option.

“Think of the preschool pod was $2 million for six classrooms,” Neumann said, referring to an addition at Pineview Elementary School 20 years ago. “We’re getting three classrooms for $400,000. So you’re adding quite a bit of classroom value for not much more money.”

The preschool and kindergarten classrooms will have their own in-classroom restrooms, and other grades will have restrooms near their classrooms. The building would also feature two playgrounds – one appropriate for grades kindergarten through second, and one for third through fifth grades – as well as an outdoor classroom area.

Moving forward, the election will be front of mind for district officials and members of the former Facilities Study Committee, which has transitioned into a Vote Yes committee. By law, school board members can not advocate one way or the other on the ballot issue, but they can provide information about the project. A key part of that education will be around the district’s tax levy, Neumann said.

“We’ve got our work cut out,” Neumann said. “Talking to people about tax rates will be the biggest thing they don’t understand.”

Specifically, the district and members of the Vote Yes committee will be speaking with the public about what a tax levy increase of $3.82 means for property owners. Taxes levies in Iowa are assessed per $1,000 of taxable valuation. But “taxable valuation” is not the full valuation of a property. Instead, the state applies “rollbacks” so that only a portion of a property’s valuation is taxed. Owners of residential property, for example, pay taxes on only about 55 percent of the home’s valuation. For a home with an assessed valuation at $100,000, a $3.82 increase would amount to about $210 per year.

Voter education will also likely include information about the district’s recent tax levy history. The current levy of $11.87 per $1,000 of taxable valuation is the result of declining tax levies each of the last four years. The current levy ranks fifth among the eight public school districts that include Hardin County property. If voters approve the bond issue in March, the new estimated levy would be $15.69 per $1,000 of taxable valuation, which is 76 cents more than it was four years ago at $14.93 per $1,000.

The district will deliver the petition to the Hardin County Auditor’s Office this week, and preparations will begin for a special election that’s just seven weeks away.

Do you have questions about the bond?

School bonds are complicated. We want to help you find answers to your questions. Do you have a question about the bond, the project or the vote? Maybe it's a tax question, or a logistical issue that's bothering you. Or just a concern that you want to know planners have considered. We'll find the people who can give you a clear answer. There are several ways to ask your question (which can be anonymous):

By form at this link (https://forms.gle/B1zo7oVFb8xuZM9SA)