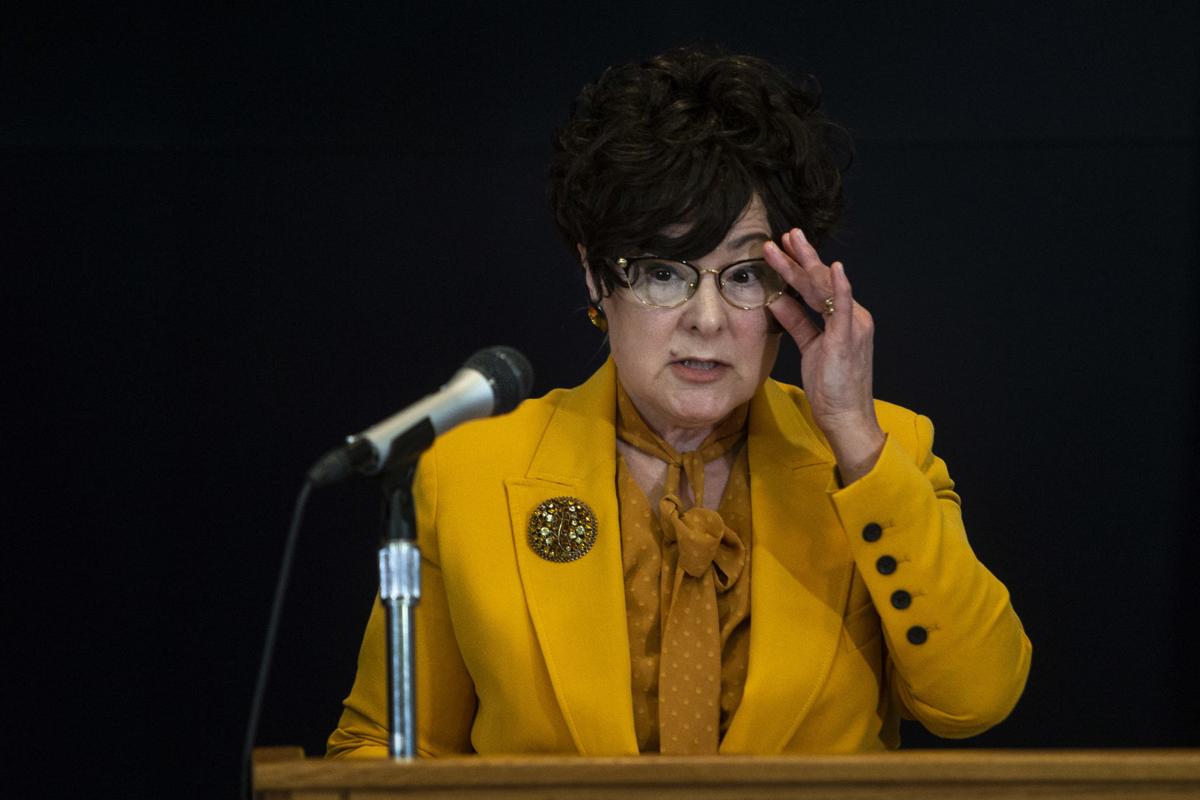 Debi Durham, director of the Iowa Economic Development Authority, speaks to the press during the daily coronavirus news conference on Wednesday, April 8, 2020, at the State Emergency Operations Center in Johnston, Iowa. KELSEY KREMER/POOL, THE REGISTER 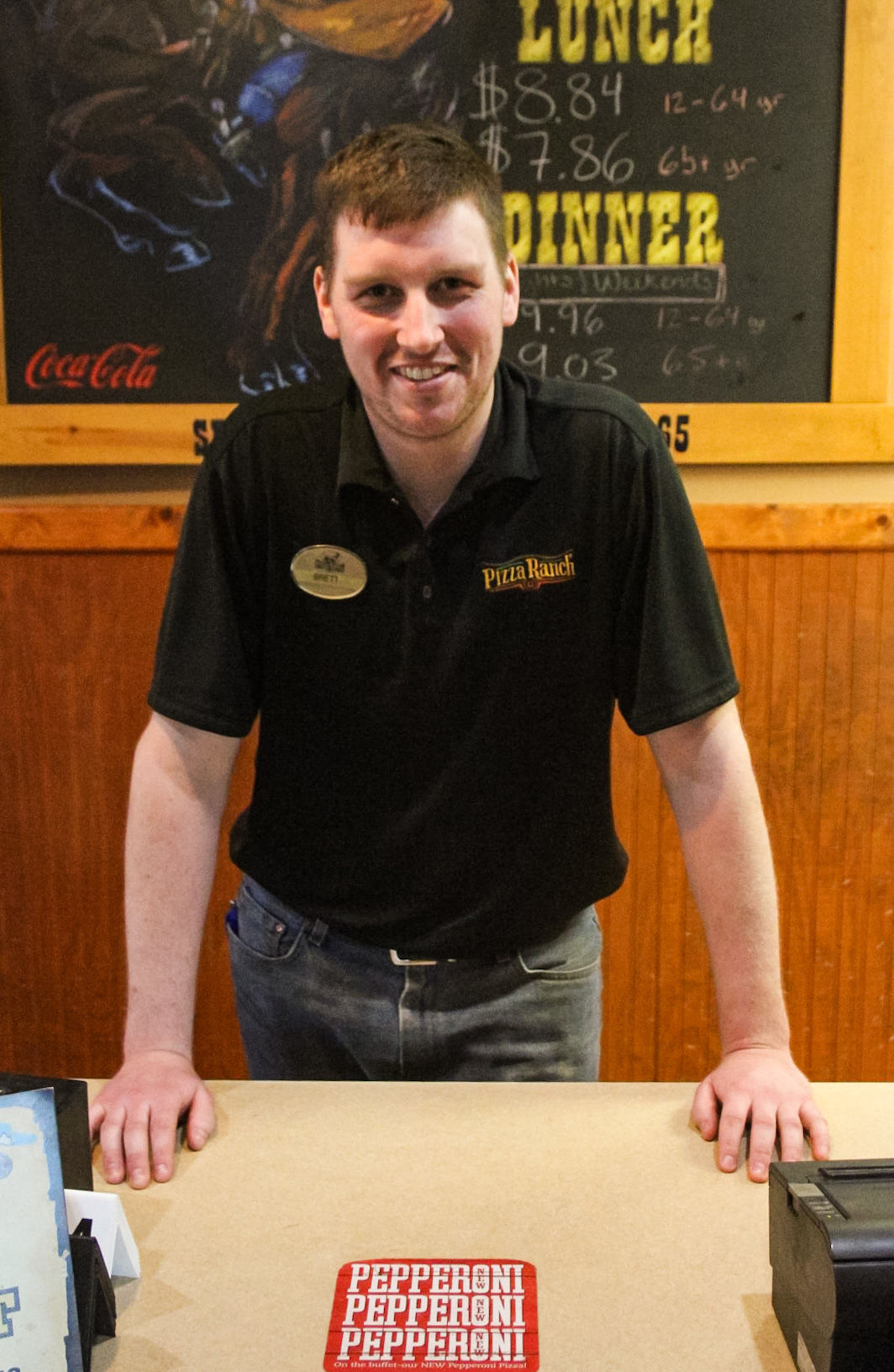 EDITOR'S NOTE: This story will be updated as additional grant recipients are announced. It was last updated at 9 a.m. on Friday, April 24, 2020.

The State of Iowa awarded $24 million in grants to hundreds of small businesses earlier this month - including some in Hardin County - that have been negatively affected by the closures that have been ordered to slow the spread of COVID-19. Another $4.5 million was released Thursday and Friday (April 23 and 24), including a total of $110,500 for Cougar Fitness 55, Grumpy's Bar and Heritage Motors in Ackley, and AmericInn, Cash for Cans and the Metropolitan Opera House in Iowa Falls.

As of Friday morning, more than $330,000 had been awarded to 18 Hardin County businesses, including restaurants, bars, a coffee shop, a furniture store, an auto shop, hotel, fitness center, movie theater, redemption center and a clothing store.

Debi Durham, director of the Iowa Economic Development Authority, said April 10 that almost 14,000 businesses applied for a Small Business Relief Grant to help with the effects of COVID-19-related shutdowns. More than $148 million was requested for the $4 million, which has now been expanded to $24 million.

Find links to the full lists of grant recipients here.

“Triage actually describes this entire effort and this entire process," she said. "We determined eligibility the businesses identifying the greatest revenue disruption were awarded in this first round of funding that went out (Tuesday, April 9) night."

Sky Kone Cafe owner Jeff Kurth said the money - a $6,928 grant - is coming his way at an essential time. 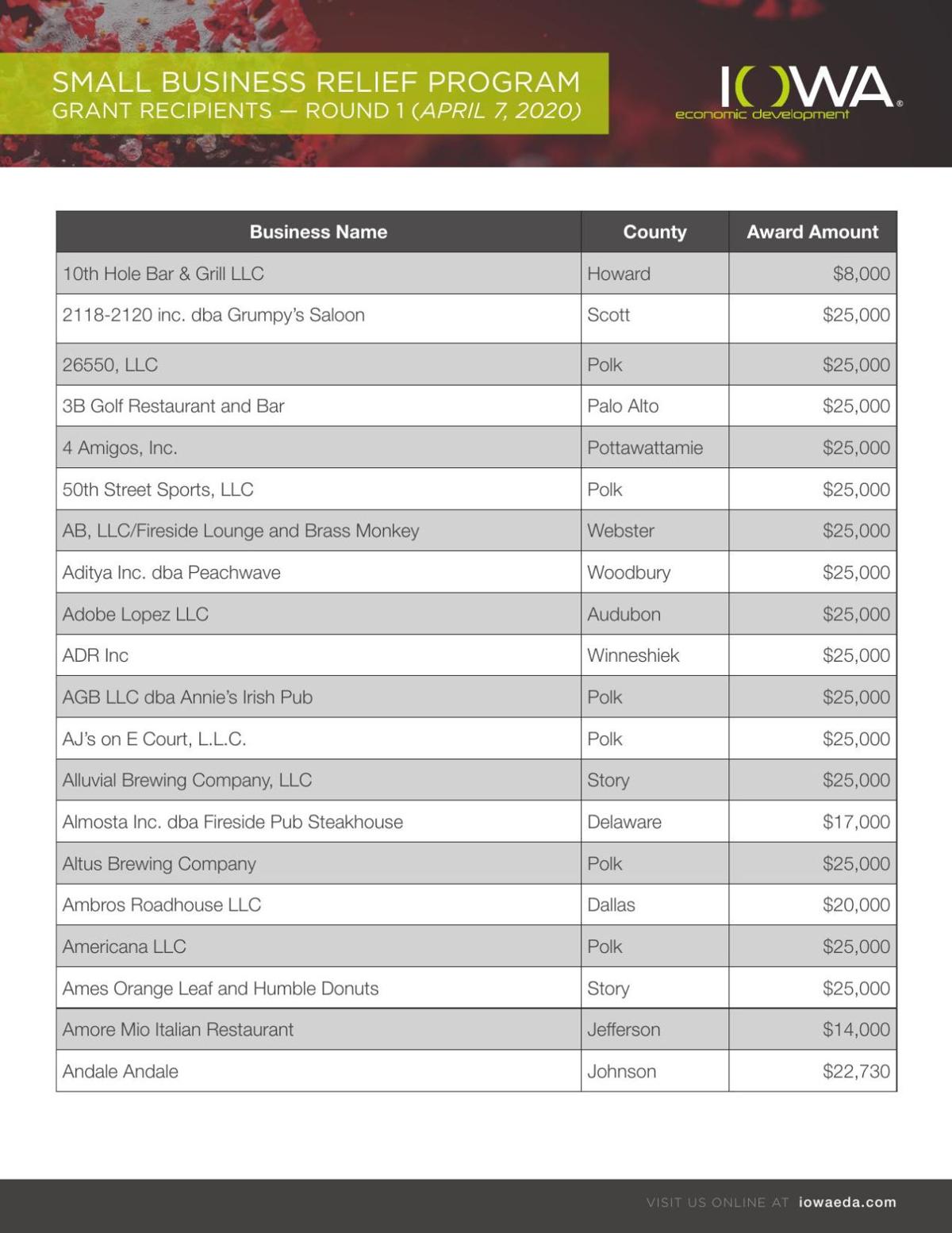 “It’s definitely (needed)," said Kurth, whose business is located in Ackley. "As tight as things were with the restaurant, especially our kind. There’s not a lot of high profit, and taking us out like they did pretty much sunk the ship.” 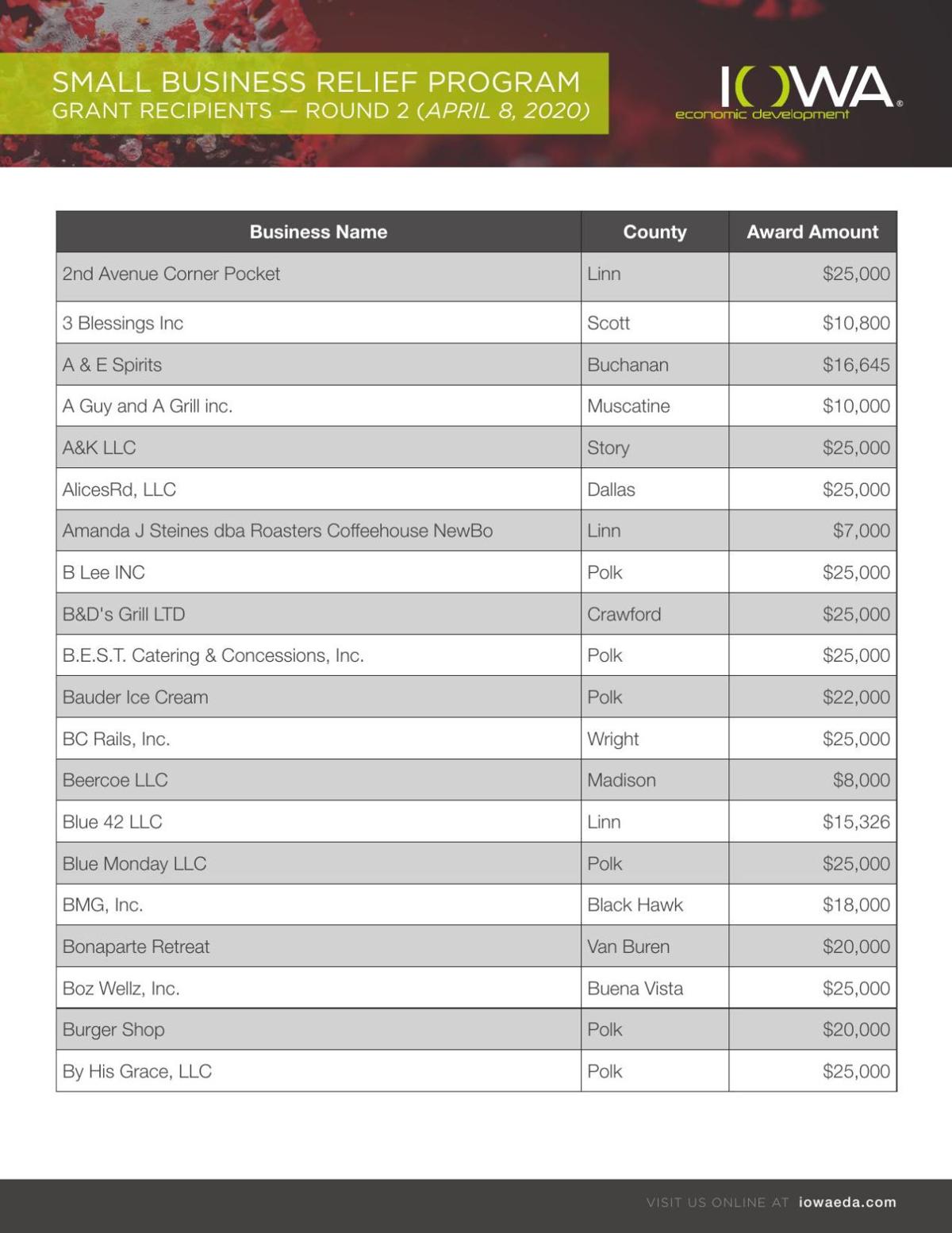 The grants were funded through the Economic Emergency Fund and the Iowa Economic Development Authority. Gov. Kim Reynolds announced last month that $4 million would be made available, but upped that amount to $24 million on April 10. 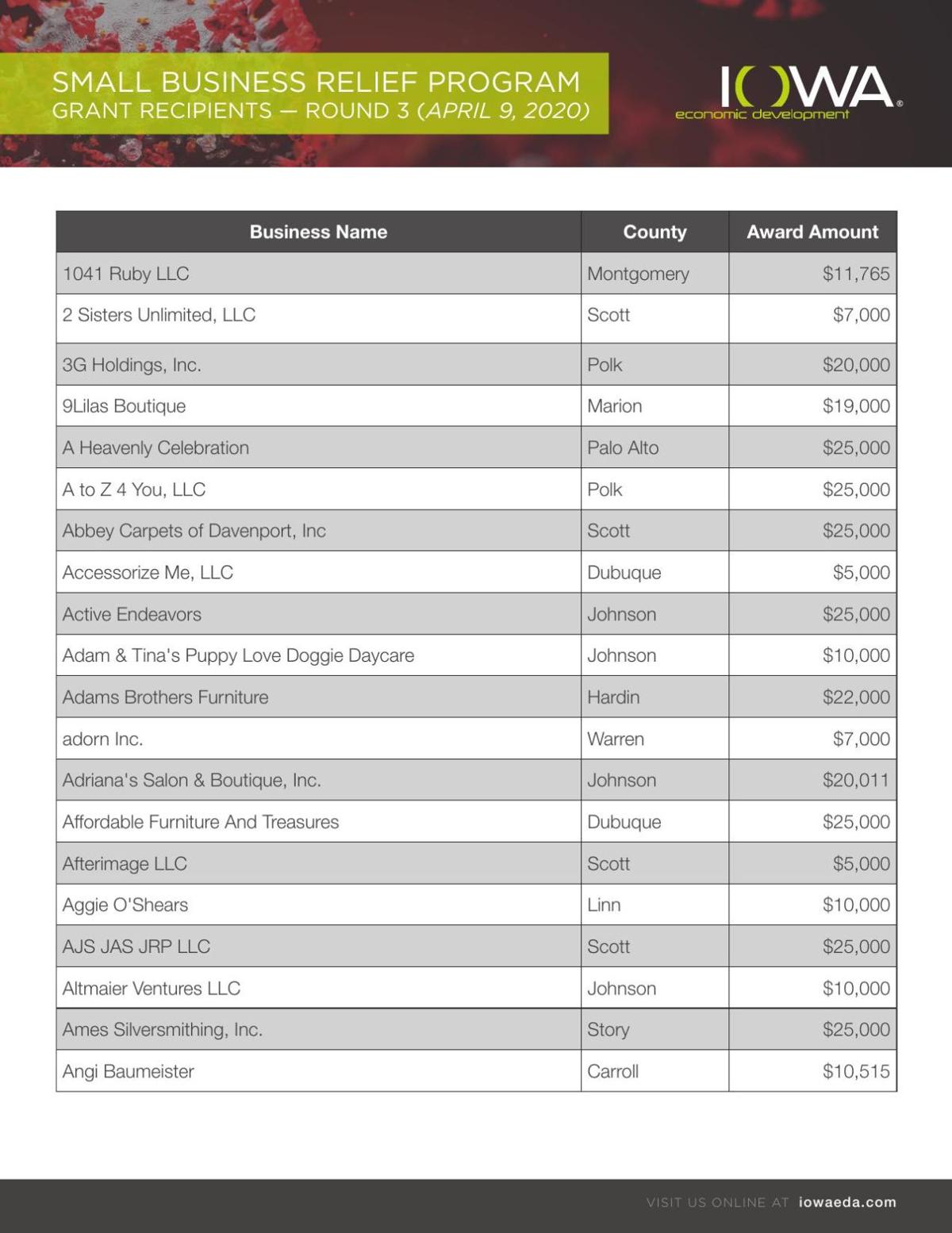 The assistance is meant to provide businesses with immediate, short-term cash flow to get them through the next month or so. The grants - ranging in amount from $5,000 to $25,000 - were made available to businesses who employ between two and 25 employees. 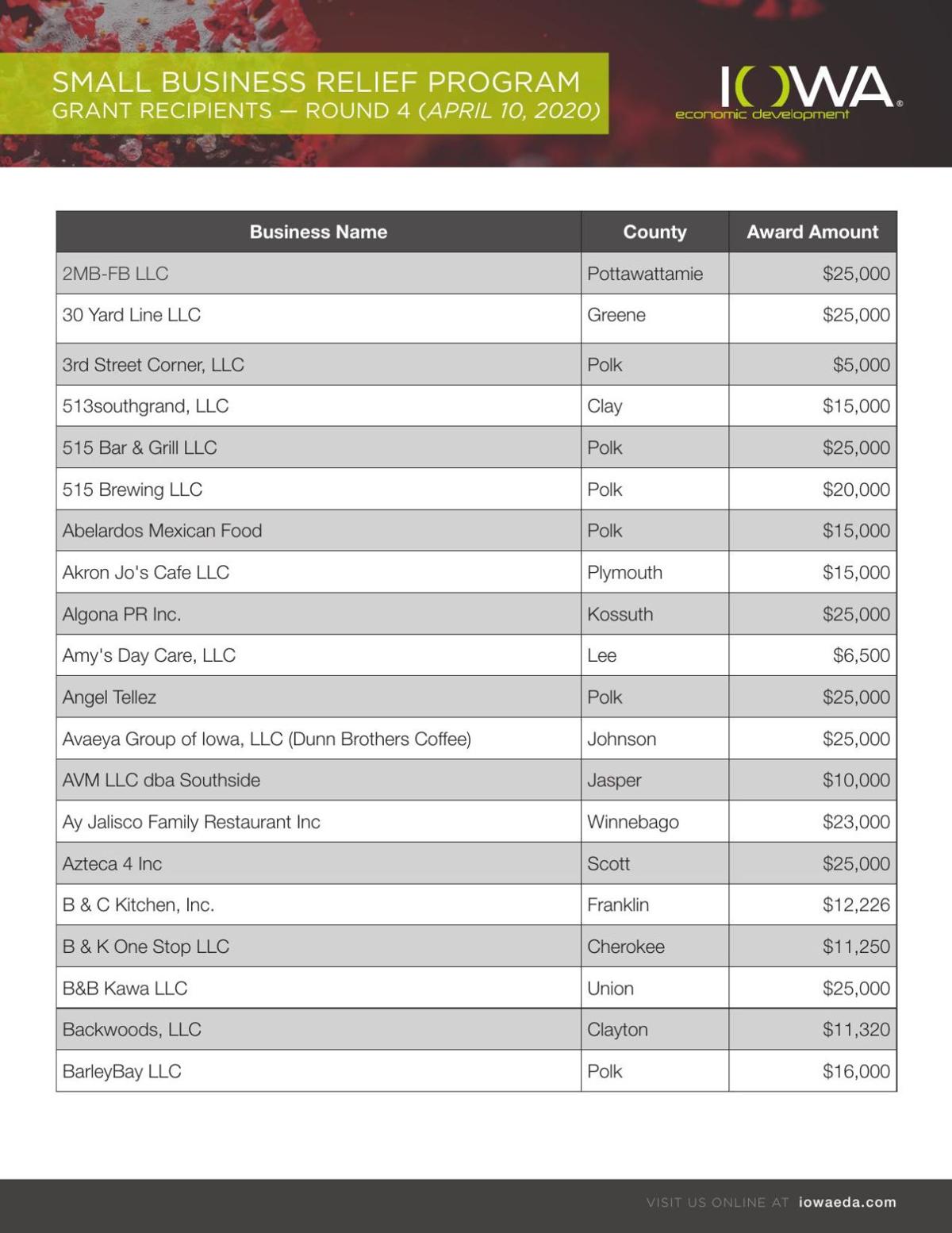 Kurth said he normally employs about five people, but has had to shut down completely other than a couple nights when they've offered curbside service for special events like the Scoop the Loop night. He said the money will be used to pay his employees, among other things. 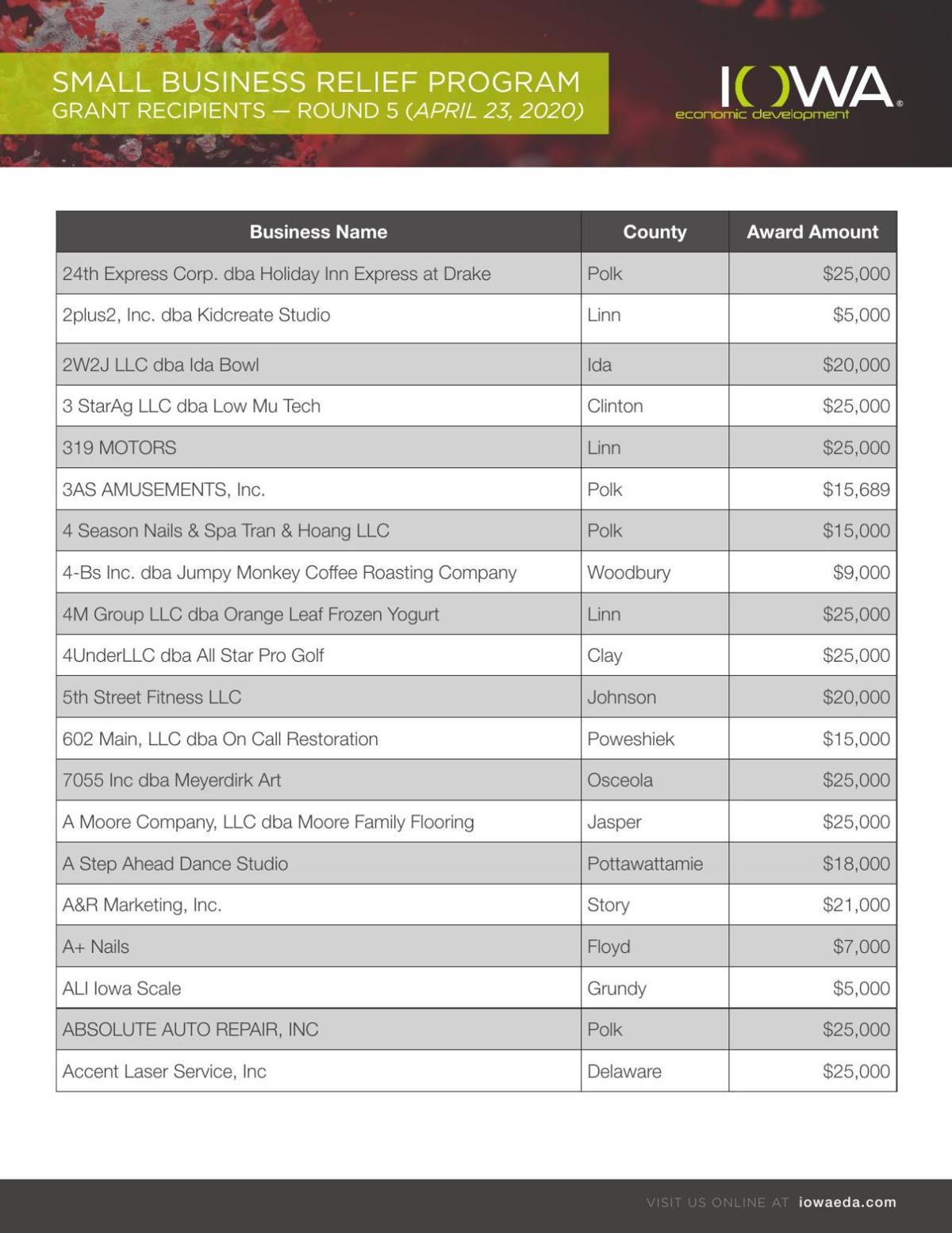 "I would need to buy the perishable stuff we used right off the bat, because as soon as they closed us all that went bad, so we’d use it to purchase stuff like that," Kurth said. "Then my rent, utilities, just the basic stuff."

Brett Pfaltzgraff, owner of Pizza Ranch in Eldora, said he's had to cut his staff from around 25 people, to between 10 and 12. The restaurant is only open from 11 a.m. to 1:30 p.m. and 4 to 8 p.m. Pfaltzgraff did say he's planning on hiring a couple more people to handle the carryout and delivery services he's offering.

Unfortunately, Pfaltzgraff said the restaurant is doing about 50 percent of its normal business. He, like Kurth, said the money - a $25,000 grant - will go toward paying bills and employees. Pfaltzgraff said he hopes this ends sooner rather than later.

“I guess for me personally, I’m a very laid back person," he said. "I don’t really worry about things too much because I know in the end everything will be taken care of. However we have taken a lot of steps to make sure we’re protecting our employees and the guests that are coming through.”

Kurth said he's grateful for the program, which he found out about through an email from his accountant.

“I just think it’s a good thing and gosh knows I needed it," he said.

The following Hardin County businesses have received grants through the Iowa Economic Development Authority's Small Business Relief Program. Each business is listed with the amount of grant money it was awarded.