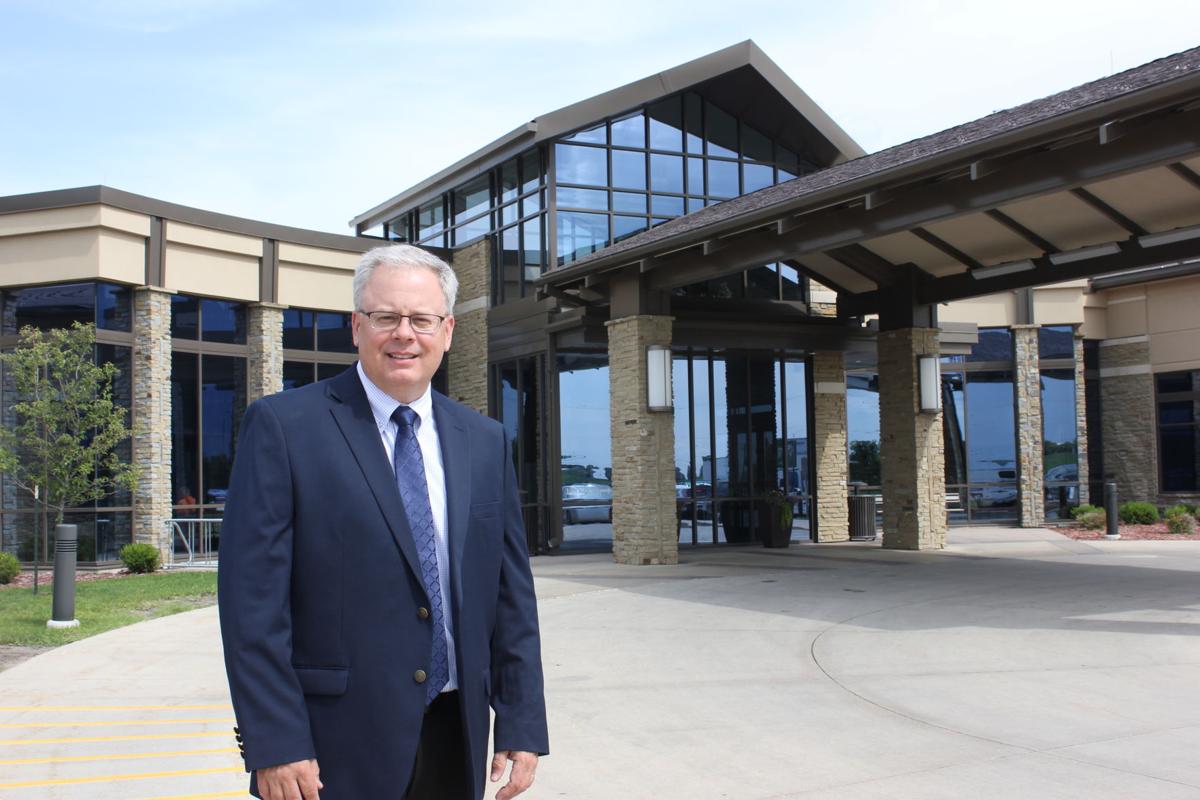 Hansen Family Hospital CEO Doug Morse stands in front of the Iowa Falls facility. Morse took the lead at the hospital in 2018, and has brought a spirit of entrepreneurship to the critical access hospital. 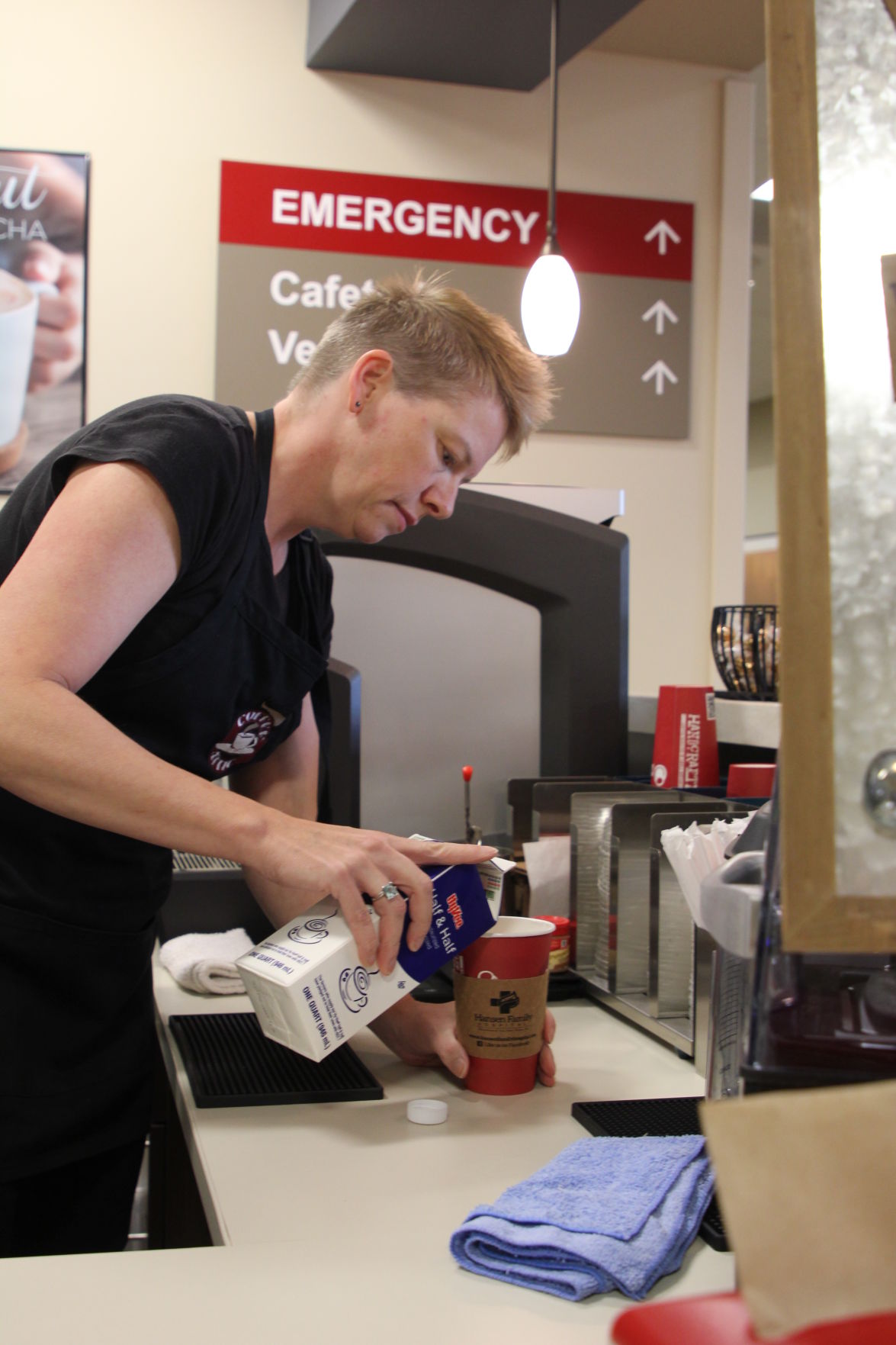 Melinda Ogaard makes coffee at the Coffee Attic Corner at Hansen Family Hospital. The locally-owned coffee shop in downtown Iowa Falls struck a deal with the hospital to use a vacant corner of the hospital's lobby to open a satellite location of the coffee shop. The coffee shop and the hospital share the profits. 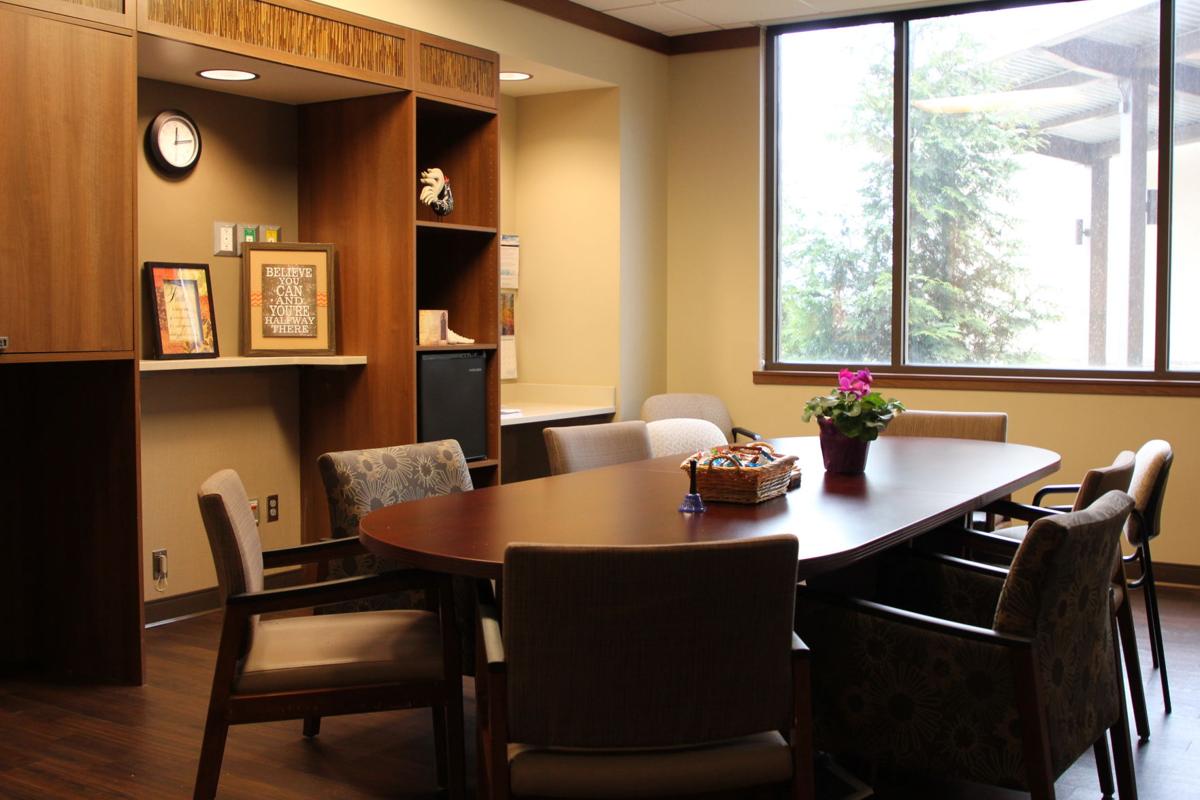 A Senior Life Solutions group therapy room at Hansen Family Hospital is ready for patients. After the Iowa Falls hospital ceased delivery of babies, its obstetrics department was converted into a home for Senior Life Solutions, an outpatient mental health program for people age 65 and older.

Doug Morse knows the solutions to the problems plaguing health care - especially in rural America - won’t be simple, but believes the key to helping small hospitals survive a changing environment isn’t much different than the approach taken by many businesses:

Morse is CEO of Hansen Family Hospital, a critical access hospital in Iowa Falls, Iowa, population 5,200. In his second month on the job last year, he used a section of wire to illustrate his thoughts on innovation to the hospital’s Board of Trustees. Morse said that on electronics retailer Radio Shack’s last day of business in 2017, its stores still were selling speaker wire, even though most people had navigated to wireless speakers.

“What I’m struck by,” Morse said after that meeting, “is the growth of new types of competitors [to health care]. The phone, the watch. That, to me, is the top, center-of-desk question. It is what we do to evolve to keep up with that. That’s a lot of our efforts. To not be selling speaker wire in a wireless world is very real to me.”

Morse’s 18 months on the job in Iowa Falls have been a tumultuous time for Hansen Family Hospital, as they have been at other rural hospitals across the U.S.

The hospital, unlike many of its peers, does not receive tax revenue. Instead, it relies solely on payment for services to operate, which means some months are near break-even. During the most recent fiscal year - July 2018 through June 2019 - the hospital recorded $24.8 million in net operating revenue. It ended the year with a profit of just $355,000 - 1 percent of its net operating revenue. And that was in a year when the hospital took big steps to reduce expenses and find new sources of revenue.

One major expense reduction was the closure of the hospital’s obstetrics department in November 2018. The decision was precipitated by several factors, including declining birth numbers, reduced reimbursement from Medicaid, and the resignation of one of only a few doctors who delivered babies in town. Hospital leaders estimate the move will save about $1 million in expenses every year.

After the OB department closure, the hospital found a new use for the space. Birthing suites and nurses’ stations were converted into a home for Senior Life Solutions, an outpatient mental health program designed for senior citizens. In Hardin County, which is home to Iowa Falls, more than 20 percent of residents are 65 or older. Within weeks of opening, Senior Life Solutions was at capacity.

The hospital faced criticism for its decision to close the OB department, but has built a “share care” model for prenatal care. If they so choose, women can continue to use the hospital and its clinics for prenatal care early in their pregnancy - including office visits, lab work and ultrasounds. When they reach the second and third trimesters, they’re transitioned to the care of the doctor who will deliver their baby an hour from Iowa Falls at the MercyOne Medical Center in Mason City.

Data collected since the program started last year indicates that 80 percent of women are returning to Hansen Family Hospital and its clinics for care following the birth of their babies.

The share care model is one that Dr. Stephen Hunter, a professor of obstetrics and gynecology at the University of Iowa’s Carver College of Medicine, said likely will be seen more often.

“This kind of model is a good compromise for the problems and the challenges we’re facing,” he said. “I think you’ll see this model probably expand over the next few years.”

Morse said changes like that, even though they’re difficult, respond to the evolving needs of a community. And that’s the kind of responsiveness that will keep a rural hospital viable and functioning.

“When this sustains over the long term, it’s going to be offering services that are truly needed by the community because those should be economically long-term feasible,” Morse said. “Offering OB in these microtowns just doesn’t fit. You can want it to fit. But it doesn’t.”

The hospital has found other ways to cut expenses and expand services. Through a management agreement with MercyOne North Iowa, Hansen Family Hospital is able to offer specialty services ranging from cardiology and dermatology, to neurosurgery. This year the hospital signed an agreement to bring two surgeons from MercyOne to Hansen Family Hospital to perform general surgery two days a week, and the hospital has recruited two new family medicine physicians to make more appointments available to patients.

Also this year, the hospital struck a deal with a locally owned coffee shop in downtown Iowa Falls, creating a satellite location in the hospital’s lobby. The shop’s owners and the hospital share the profits. Hospital leaders also worked with local and state veterans affairs officials to add Hansen Family Hospital to the network of hospitals where veterans can receive care.

Morse spent three years as director of the John Pappajohn Business and Entrepreneurial Center at North Iowa Area Community College in Mason City, and he’s brought that business approach to his leadership at Hansen Family Hospital. The management team writes business plans when it is preparing to launch new or expanded services.

When he looks to the future, Morse sees a new role for hospitals - especially critical access hospitals like Iowa Falls’.

“We are straddling this barbed wire fence of still being paid as a sick care organization -- because we only get paid when people are sick or injured -- to an arrangement where we keep a population healthy,” he said. “Any given month, volumes are down, and that could be because we’re doing a better job of keeping folks healthy. But then you get paid less. It’s this transition from volume to value.

“The real value,” Morse said, “is keeping people healthy. And in the ideal world our whole town would be so healthy, it would be rare to come here. But under the current payment model, we wouldn’t exist. How do we get to a point where the organization thrives when people are healthy?”

Morse and the leadership team at Hansen Family Hospital still are working on that question. In pursuit of it, the hospital is involved with Wellmark’s Accountable Care Organization program, which provides financial incentives for keeping people healthy.

But that’s still a long way off.

In the meantime, Hansen Family Hospital is focused on diversification - partnering with nearby towns to open small clinics, adding a fitness center where the public can exercise, and continuing to push health care leaders to adopt a new model of providing care in rural areas.

One that serves the people’s needs and provides hospitals with an avenue for survival.

Seeking a Cure: The quest to save rural hospitals is a collaborative project including the Institute for Nonprofit News and INN members IowaWatch, KCUR, Bridge Magazine, Wisconsin Watch, Side Effects Public Media and The Conversation; as well as Iowa Public Radio, Minnesota Public Radio, Wisconsin Public Radio, The Gazette (Cedar Rapids, IA), Iowa Falls Times Citizen and N'west Iowa REVIEW. The project was made possible by support from INN, with additional support from the Solutions Journalism Network, a nonprofit organization dedicated to rigorous and compelling reporting about responses to social problems. For more stories visit hospitals.iowawatch.org

Seeking a Cure: The quest to save rural hospitals is a collaborative project including the Institute for Nonprofit News and INN members IowaWatch, KCUR, Bridge Magazine, Wisconsin Watch, Side Effects Public Media and The Conversation; as well as Iowa Public Radio, Minnesota Public Radio, Wisconsin Public Radio, The Gazette (Cedar Rapids, IA), Iowa Falls Times Citizen and N'west Iowa REVIEW. The project was made possible by support from INN, with additional support from the Solutions Journalism Network, a nonprofit organization dedicated to rigorous and compelling reporting about responses to social problems. For more stories visit hospitals.iowawatch.org.