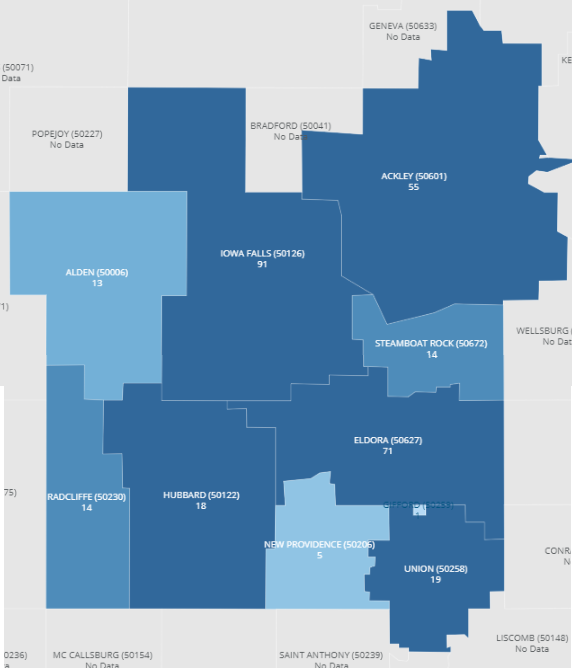 Hardin County saw the biggest jump in COVID-19 cases last week since an outbreak at the Boys State Training School in Eldora infected 52 people in late July. According to information released on Monday, between Sept. 21 and 28, a total of 27 Hardin County residents tested positive for the disease. Those new diagnoses pushed the county’s cumulative infection total to 307 since testing began in March.

The latest data were released by Greenbelt Home Care/Hardin County Public Health. The numbers show that of the 27 new cases, most (11) were in people age 18-40, and at least 15 are residents in the Ackley ZIP code. ZIP code infection numbers were first released two weeks ago. Since then, the maps have shown rapid growth in the number of cases in and around Ackley, from 29 on Sept. 14, to 55 this week. While the 50601 ZIP code is home to about 14 percent of the county’s residents, it has had 18 percent of the COVID-19 cases. 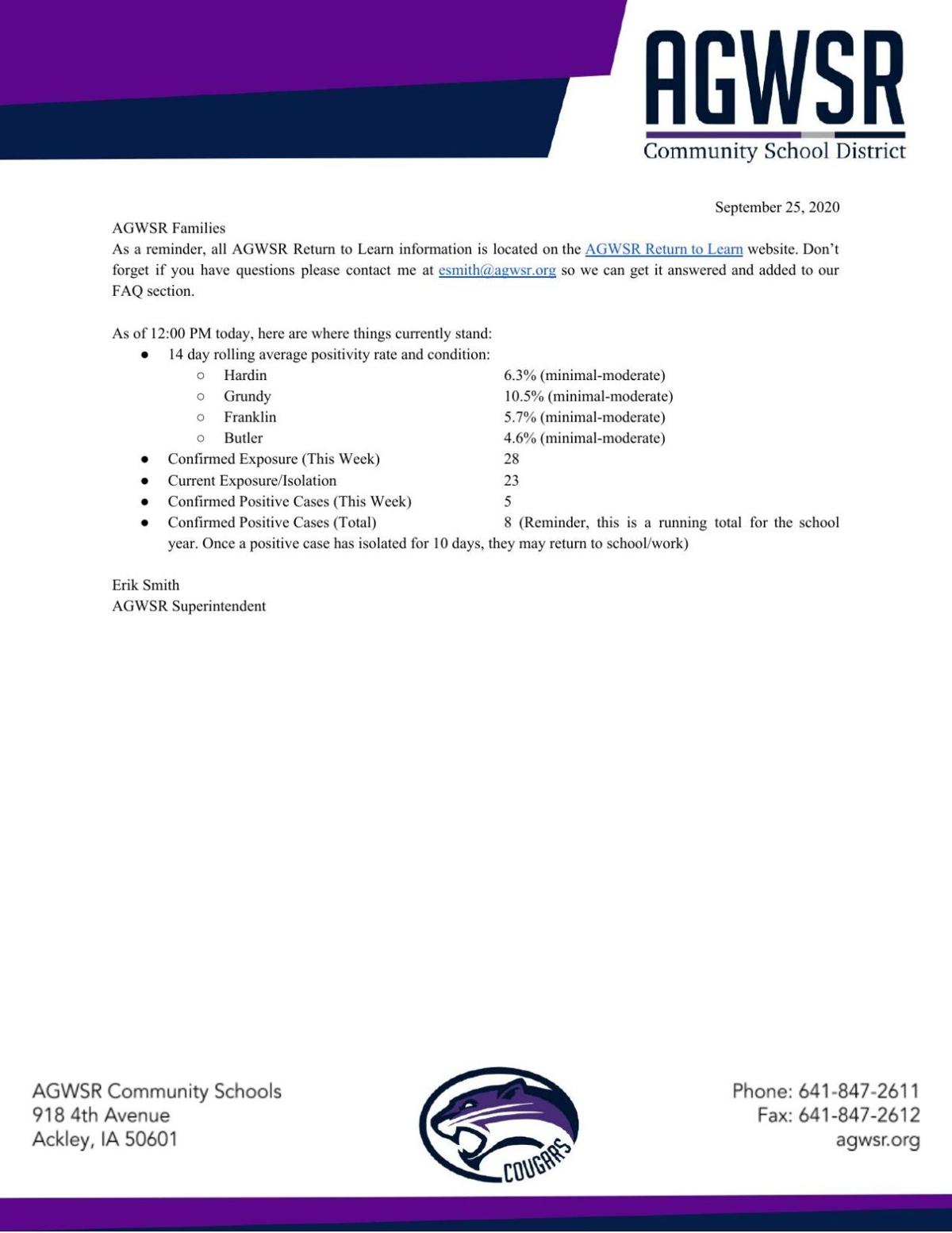 AGWSR Superintendent Erik Smith announced last Friday that there had been five new positive cases of COVID-19 in the district that week, bringing the school year case total to eight. The district is not distinguishing between students and staff when it announces positive cases.

Hardin County’s public health agency also announced on Monday that three Hardin County residents are currently hospitalized for treatment of COVID-19 symptoms. Of the 307 people who’ve tested positive, 233 have recovered. One person has died. That leaves 73 people currently infected with the disease.

Between Friday and Monday, the state added nearly 27,000 antigen tests results from surveillance testing at long term care facilities. Times Citizen analysis of testing numbers shows that 186 tests were added to Hardin County's total over the weekend, but daily testing totals during that time show only 59 individuals were tested.

The antigen tests are part of a new program that requires surveillance testing of staff at long term care centers. Lora Juhl, executive director of Scenic Living Communities in Iowa Falls, said the guidance – released by the Centers for Medicare and Medicaid Services (CMS) earlier this month – requires long term care facilities in counties that have a positivity rate above 10 percent to test all nursing home staff twice every week. If a county’s positivity rate is between 5 and 10 percent, employees must be tested once per week, and if the positivity rate is less than 5 percent, employees should be tested once a month. But that guidance isn’t as simple as it seems.

To comply with the testing orders, some facilities received rapid COVID-19 testing devices to use on site. Scenic Living Communities’ Scenic Manor received one of the devices, as well as 330 testing kits. But once those testing kits are gone, the facility will have to pay for its own testing supplies.

“We were required to obtain testing capabilities on our own and that’s been very interesting,” Juhl said. There are two companies making tests for use with the government-issued machines. Both have waiting lists. Juhl said Scenic Manor got on one company's waiting list, and it expects to receive the test kits – priced at $30 each – by mid-October. If the free test kits rare used up before the new ones arrive, Scenic Manor will have to conduct rapid testing through a company that charges $75 to $90 per test. There are about 90 Scenic Manor employees who need to be tested (employees who don’t work in the nursing home do not have to comply with the surveillance testing), and Juhl said those expenses could add up quickly.

Juhl said Scenic Manor recently received a shipment from the government containing a different kind of test. They are cards that hold an antigen reaction agent. The test shipment was unexpected.

“I fully believe this will continue to change,” she said of the government’s guidelines.

The schools in Hardin County have reported the following total positive COVID-19 cases since the start of the school year:

*The districts do not announce whether the cases are in students or employees.