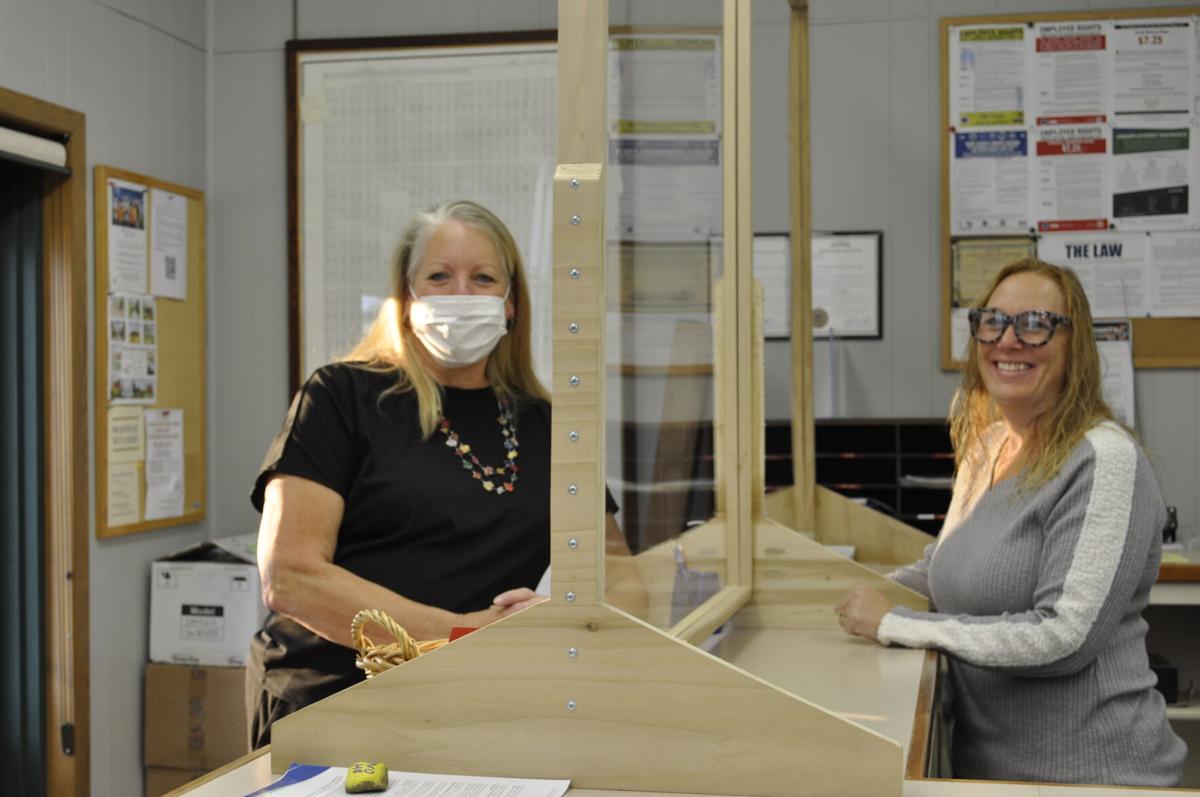 Ackley City Council member Judy Crawford (left) poses for a photo with Ackley City Clerk Malena Dennis. Crawford said she thinks Ackley would be well served by hiring a city manager who could oversee business at City Hall instead of relying on city council members who have other jobs that keep them busy during the day. 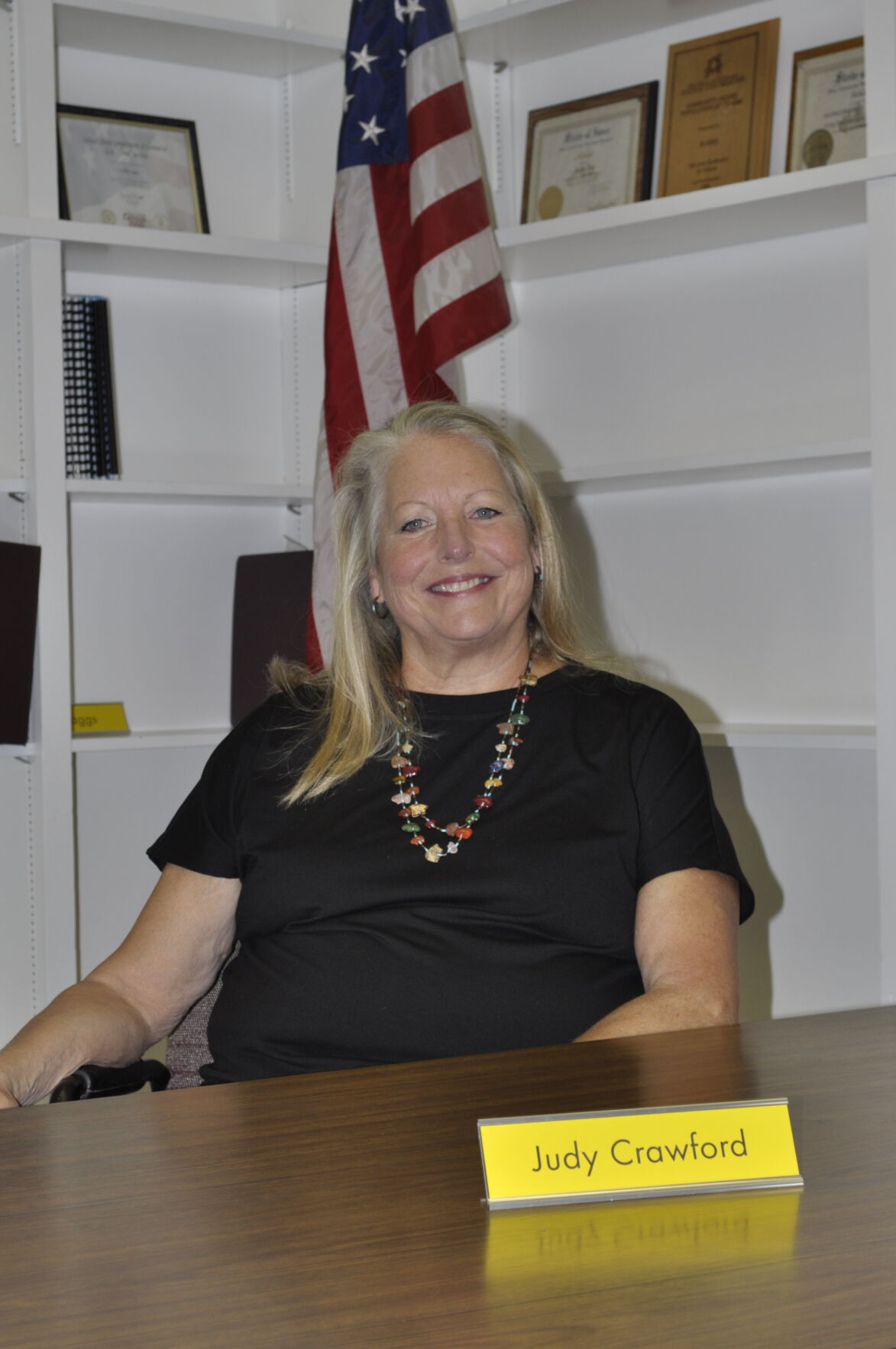 Judy Crawford has served on the Ackley City Council since she was sworn into office in January 2018. She brought with her eight years of experience on the Iowa Falls City Council. She said Ackley’s greatest asset is its citizens, who community-minded and willing and ready to step up to help with projects when they’re needed.

Serving the citizens of Ackley is a position that city council member Judy Crawford sincerely enjoys. She was first elected to her position in November 2017 and began serving her term in January 2018. Years earlier, she’d served eight years on the Iowa Falls City Council, and she brought the experience she gained there to the community of Ackley.

A firm believer in being involved in the community she lives in, Crawford’s passion for Ackley continues well beyond serving on the council. She is a Master Gardener and has volunteered for several projects in Ackley, including the gardens in front of the post office, and serving on the Ackley Tree Board.

The most difficult part of serving the citizens of Ackley has come during the COVID-19 pandemic, she said.

“During a time when we must limit the number of people at council meetings to meet social distancing guidelines, it means there are fewer people in the galley,” Crawford said. The guidelines, while necessary, can limit residents’ access to local government. With that in mind, she remains accessible to residents via telephone, email, socially distanced face-to-face communication, and by letter.

The pandemic has also limited access to public buildings throughout the community. The Ackley Civic Center, shut down by proclamation of the mayor of Ackley in mid-March, remains closed. The public library, closed by the same proclamation, opened with strict precautionary measures on Sept. 2.

The guidelines related to the pandemic are an added expense to a city budget that is tight in the first place. Crawford explained that while some funding for things like disinfectants, masks, gloves, and plexiglass barriers, has been provided by the federal government, those funds are quickly depleting.

“Early on in the pandemic, an exposure of a city employee led to having City Hall and police vehicles disinfected by an outside company,” Crawford said. The expense used a good portion of the available funding. When the funds are fully depleted, costs to provide personal protective equipment for city employees, as well as supplies for cleaning and disinfecting public spaces, will need to come out of the city’s budget.

While smaller communities like Ackley are facing similar hurdles as larger cities during the pandemic, Crawford said both must follow the same mandates set in place by the state or federal government.

“We can’t just do our own thing,” she said. Larger municipalities may be able to stagger shifts for their operations. With fewer numbers of employees, the City of Ackley has limited options to do the same.

Crawford said the focus of the council and the issues facing city leaders remain the same as before the pandemic. The city continues to work toward the construction of a new wastewater treatment plant. The process is long and tedious, but the objective remains unchanged by the presence of COVID-19.

Also unchanged is Crawford’s desire to make sound decisions for the future of the community. And those decisions must not tie the hands of future councils, she said. Each decision must be carefully weighed so as not to financially burden future councils who will face unknown issues which arrive during their tenure.

Crawford said the most important role of any council member is to lead by example.

“If you want citizens to volunteer, you need to be willing to do it too,” she said. “A good employer once told me that you should never ask an employee to do anything you wouldn’t do. It’s the same principle. If citizens see you pitching in, they will too,” she said.

Crawford believes the current members of the Ackley council represent a good cross-section of the community. “There is a lot of growth within the current council,” she said. “They’ve been good to work with and we’re making progress. She added that she does still see a need for a city manager – someone who oversees the community. Having the position would also clarify a chain of command for city employees.

Her opinion, she said, is based on knowing that the majority of council members, along with the mayor, have day jobs – positions that require their time and focus. Crawford believes a city manager would have more time to dedicate to daily operations.

Above all, Crawford sees the current council as being knowledgeable of the assets that make up the community – the library, school system, fire and ambulance services and more. Despite that, she believes that the most overlooked asset of the community is the citizens. They are, she said, some of the most community-minded individuals that she has met. If there is a need or a project, the city can count on them to pull together and accomplish any goal or project they set their minds to.

“For a town of our size, we still rally behind a cause and raise the funds needed,” Crawford said. “That’s admirable.”

Until a vaccine becomes available, Crawford said Zoom meetings and social distancing, including the same at council meetings, will be the new normal that everyone must adjust to.

“A vaccine won’t be readily available in weeks. And until we have it, nothing will change,” she said. “I see this being ‘normal’ even after a vaccine. It’s going to be a year and a half or more before we know if it works.” She said patience with the process is important, noting that she doesn’t want FDA rules to be set aside. “It all takes time, we need good, hard facts,” she said.

Crawford’s first term on the council comes to an end in November 2021. Asked whether she’ll consider running for a second, she said the thought has not crossed her mind yet.

“There are things I’d like to see completed and resolved, including the pool project and downtown beautification,” she said. “There is much to be accomplished.”